Ten drivers will line up for the Finnish event in their DS3 R3s all with the same desire to win.

At the height of summer, the Citroën Top Driver series stops off in the country of a thousand lakes for a truly eye-catching event. With its faultless organisation and exceptional course, Rally Finland is also one of the season’s most popular races. Alongside Citroën Racing’s works crews in their DS3 WRCs, ten drivers will line up for the Finnish event in their DS3 R3s all with the same desire to win.

Held for the first time back in 1973, Rally Finland has long been considered to be an event where only drivers with bags of courage could hope to win. And with good reason, with average speeds approaching 123kph for the World Rally Cars, the Scandinavian course can lay claim to be the fastest in the world. Held on roads around the city of Jyväskylä, the nerve centre of the event, the rally will remain largely unchanged for this, its fortieth edition. The crews will start the race with two short timed stages while the traditional “Jukojärvi” and “Lankamaa” tests, the longest stages on day two, will be run in the opposite direction to that of recent years. 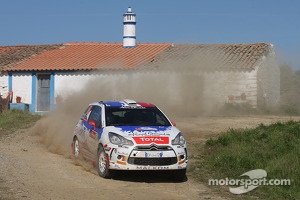 The Finnish round will be a big test for the Citroën Top Driver crews, one which is likely to favour the more experienced drivers. Currently joint leader of the championship on the same points as Quentin Gilbert, who is especially comfortable on gravel, Sébastien Chardonnet’s sole aim this weekend will be to move ahead of his rival.

“We know this rally as we competed here in 2012. It’s an iconic event, with a spectacular course and a unique atmosphere. We’re really looking forward to it, although we know it won’t be easy. The key will be discipline and precision; we have to avoid making any mistakes and try as hard as possible to have an intelligent and efficient race,” explained Sébastien Chardonnet.

“This is the first time I have competed at Rally Finland and I am both excited and a little apprehensive,” commented a delighted Quentin Gilbert. “I have been looking forward to this event for a long time, but it‘s going to be a totally new experience for me on this legendary course, which is very quick and has lots of jumps. I won’t be taking any unnecessary risks but I want to be quick and to try and hold onto my position in the standings.”

Just four points off the leaders, Keith Cronin will be another of the pre-event favourites. His spirit and determination will serve him well on the Finnish course. Boosted by his win in Sardinia, the young German Christian Riedemann would love to reproduce that performance here in Finland and move into the top three.

Quick and combative, Alastair Fisher will also be a leading contender here, as will be Stéphane Consani, who showed what he can do in his first appearance in the series in Italy. In the Swiss contingent, Federico Della Casa and Francesco Parli will be setting their sights a little higher. After drawing a blank on their first outing, the two countrymen got some points on the board in Sardinia and will want to keep up the momentum here. After finishing out of the points at his home event, Simone Campedelli will need a little luck if he is to get among the leaders. His main aim will be to add to his points tally.

All of which is without reckoning with a new crew that will be joining the series at this third rally, which also marks the halfway stage of the Citroën Top Driver season. 24 year-old Finnish driver Jussi Vainionpää, along with co-driver Mika Juntunen, will be the event’s local boy. Current leader of the Finnish Rally Championship in the SM2 category, the young driver will have a trick or two up his sleeve in taking on the jumps that litter the route of the legendary rally.

“My aim is to test myself against the competitors in the Top Driver series, which features some of the most talented young international drivers”, revealed the Finn. “I’m going to try to set good times and gain as much experience from taking part as possible.”

As regards the teams’ championship, Top Teams still heads the standings with sixty points whilst Charles Hurst Citroën Belfast remains within striking distance in second position. Delta Rally completes the top three and will be entering Federico Della Casa instead of Bryan Bouffier, who has withdrawn from the rally.

Qatar M-Sport ‘yump’ to it in Finland