Sébastien Chardonnet/Thibault de la Haye and Keith Cronin/Marshall Clarke are set for a fight to the death on the Welsh forests’ formidable gravel roads.

The final round of the World Rally Championship, Wales Rally GB will also mark the end of this year’s Citroën Top Driver series. And although the line-up for the race features no fewer than eleven DS3 R3s, only two crews still have a chance of claiming the title. Sébastien Chardonnet/Thibault de la Haye and Keith Cronin/Marshall Clarke are set for a fight to the death on the Welsh forests’ formidable gravel roads. 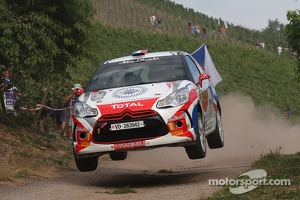 Having returned to its mid-November slot, no-one would be surprised if the British round served up the miserable conditions for which the rally is renowned and which might be summarily described as “cold, wet and muddy”. In addition to moving the service park to the north of Wales, there have been a few changes made to this year’s itinerary. The big classics such as “Hafren”, ”Sweet Lamb”, “Myherin” and “Gartheiniog” still feature but six new stages have been added, especially on Thursday with three brand new tests.

Current leader of the Citroën Top Driver standings, Sébastien Chardonnet admitted he’s looking forward to the race. “I’m on the verge of achieving one of my childhood dreams; it’s almost within my grasp but there’s still one race left to go, and what a race! With so many DS3 R3s competing, it promises to be a really good scrap. Thibault and I, we simply have to be up to the task. We have worked hard to prepare for this and we hope that the Citroën DS3 R3 will continue to be as reliable as it has been all season.”

The talented youngster, who secured the two-wheel drive World Championship title at the Rallye de France, has won once and finished as runner-up three times in the five rounds of the Citroën Top Driver contested thus far. Keith Cronin, his closest rival, is seven points behind him in the championship standings and, mathematically, is the only one who can still challenge Sébastien for the title. The Frenchman’s task will be all the more complicated as the Irishman will be competing on roads that he knows well.

“It’s going to be a great battle with Sébastien,” admitted Keith. “The conditions will be difficult and we know that this rally can throw up all sorts of challenges. The other crews competing in DS3 R3s will also be looking to get involved in the fight, which is going to pose even more problems for us but I really can’t wait for the rally to get started! Although I have never taken part in this rally, I have competed in other events in Wales and I have always liked this kind of terrain. The championship has been closely contested throughout the season and the last round will be exciting. The prize for the winner is very attractive and we’ll be giving our all to try and get the win.”

Currently third in the overall standings of the Citroën formula, Quentin Gilbert returned to winning ways with verve at the French round. Although he is no longer in the running for the title, Gilbert can still finish as runner-up if he produces a perfect performance in Wales.

Winner of this year’s Citroën Racing Trophy UK, the Finn Jukka Korhonen will line up for the rally with a simple target: test himself against an international field and get a feel for the pace of a World Championship event.

In the teams’ championship, Top Teams and Charles Hurst Citroën Belfast will be fighting it out for the title. Although there are 22 points separating the two outfits, the outcome of the championship is far from decided. Both teams will be entering two particularly sharp crews in the race, each of whom will be determined to pick up as many points as possible for their team.

“It’s all set up for a spectacular finale,” analysed an excited Marek Nawarecki, Customer Racing Manager for Citroën Racing. “Keith and Sébastien have demonstrated their potential throughout the season by finishing among the leading positions in their DS3 R3s. They have got yet another big test ahead of them in Wales and they’ll need to manage the pressure, the competition and the inherent difficulty of the rally. The fact that there are five other crews, mostly from the Citroën Racing Trophy UK and competing in DS3 R3s, will provide them with another obstacle to overcome. All that remains for us to do is to wish everyone the best of luck and… may the best man win!”