With the final day featuring two runs on the legendary Ouninpohja stage, Mikko Hirvonen and Jarmo Lehtinen had hoped to get back onto the Rally Finland podium. However, despite pushing all the way, the Citroën Total Abu Dhabi World Rally Team crew finished fourth. Dani Sordo and Carlos del Barrio sneaked into the top five in less than ideal circumstances, benefitting from the retirement of Kris Meeke and Chris Patterson. 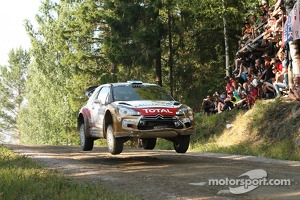 Eight stages, covering a total of 130 kilometres, made up the schedule for the third and final leg of Rally Finland. The two runs on Ouninpohja were undoubtedly the highlight of the day, eagerly anticipated by competitors and fans alike!

Fourth overall at the start of proceedings, Mikko Hirvonen promised he would push hard to try and get close to a spot on the podium. Despite a perfect morning, the gaps remained more or less unchanged as the crews reached Jyväskylä for the midday service.

“The top three guys are also going very quickly,” admitted the local hero in the land of a thousand lakes. “Everyone knows these stages well enough, including Ouninpohja. Even without making the slightest mistake, I just couldn’t close the gap on them. If I took huge risks, I could probably go a little bit quicker, but I don’t think that it’s worth taking that sort of risk. I don’t think I can make into the top three under normal conditions, but I have to keep pushing to stay within striking distance, just in case something happens…”

Held up by Evgeny Novikov yesterday on SS8, Kris Meeke had his time corrected at the end of the day. Fifth overall going into this final day, the Northern Irishman was just 8.1s behind Mikko Hirvonen. He stayed in this position throughout the morning, taking particular enjoyment from driving on Ouninpohja and its 169 jumps: “It’s a bit like a rollercoaster! I drove on this stage seven years ago, but that was in my Citroën C2 S1600. In a World Rally Car, the feeling is incredible because you’re going as such high speeds. The atmosphere is like no other; there was almost no noise at the start, because the spectators know that the drivers need to be fully focussed before setting off. I can’t wait to do it again!”

Unfortunately for the Abu Dhabi Citroën Total WRT driver, his second run ended a little prematurely as he rolled his car shortly before the finish. Just shy of completing a perfectly controlled race, Kris was unable to reap the rewards that his efforts deserved.

Mikko Hirvonen had hoped that his decision to go with hard Michelin Latitude Cross tyres for the afternoon’s loop would make a difference and enable him to close the gap to the leaders. “The road wasn’t dry enough, so it wasn’t the best option,” he admitted afterwards. “I tried everything, gave my all, but it’s almost impossible to make up lost time at this rally. I didn’t come here for fourth place, so for sure, this result is disappointing.”

A good way back from Mikko, Dani Sordo inherited fifth position at the end of the race. But the Spaniard was far from pleased with his rally: “My finishing position could be regarded as satisfactory, but I can’t be happy after a race like that. I never felt confident and the pace wasn’t really there. It was a weekend that I’d rather forget about, to be honest.”

“Not having any of our cars on the podium is frustrating for the whole team, especially given the level of performance shown by Mikko at the start of the rally,” confirmed Yves Matton, Citroën Racing Team Principal. “We’re disappointed for Kris, who produced an impressive performance in his first rally in the DS3 WRC. It’s a shame he wasn’t able to turn his good form into result by making it to the end. Starting tomorrow, we’ll start thinking about Rallye Deutschland, which will mark the WRC’s return to tarmac.”

Victory for Ogier in Rally Finland