Rally Italia Sardenga, round seven of the World Championship, marks the half-way stage of the season.

Ahead of the short summer break, the Citroën Total Abu Dhabi World Rally Team crews will be looking to produce strong performances. Winners here last year, Mikko Hirvonen and Jarmo Lehtinen return to an event where they have always done well. Dani Sordo and Carlos del Barrio will be equally determined to confirm the good form they have enjoyed on ‘hard’ gravel rallies.

Three weeks after the Acropolis Rally, the WRC continues at a round with similar characteristics: Mediterranean climate, stages on gravel roads that are fairly demanding on cars and tyres, and a compact course featuring ‘only’ 300 kilometres of special stages. Although the rally only lasts two days (Friday and Saturday), the organisers have nonetheless made the most of the time available, since the crews will be racing for at least 28 of the 37 hours separating the start from the finish! Mainly made up of tests of between 15 and 20 kilometres in length, the course is being held on stages that are well known to the drivers. The major innovation for this year is the Gallura stage, which will be held under cover of darkness on Saturday night. 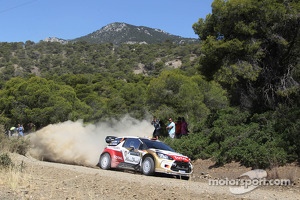 Rally Sardegna has often been a happy hunting ground for Mikko Hirvonen. Last year, the Finn claimed his first WRC win in the Citroën DS3 WRC. Before that, he had been runner-up here five times in a row, starting in 2006. “Winning in Sardinia was one of the highlights of my 2012 season,” recalled Mikko. “After a series of podium finishes, I had pushed hard from the word go. My only goal was to win the rally! We have to start from scratch again this year. I think there’ll be a real fight at the front, starting in qualifying, especially as the starting positions that we choose will be used for half of the rally. After a frustrating weekend in Greece, I hope that the pieces of the jigsaw come together to enable us to secure a good result before the summer break.”

Although he missed the event in 2012, Dani Sordo has nonetheless finished as runner-up in Sardinia on two occasions. The Spaniard returns to the event feeling particularly motivated: “We saw in Portugal and then in Greece that I was pretty comfortable on road surfaces offering a good level of grip. That should also be the case in Sardinia! Finishing second at the Acropolis Rally did me a lot of good; it helped me to regain confidence after a bit of a rough patch. Like Mikko, I’m aiming for a very good result this weekend.”

The third works Citroën DS3 WRC, competing for the Abu Dhabi Citroën Total World Rally Team, will be driven by Khalid Al-Qassimi and Scott Martin. The United Arab Emirates driver has finished all three of the rallies he has entered this year, and is now determined to rack up his first points of the season this time around.

Clear winners in WRC2 at the Acropolis Rally, Robert Kubica and Maciej Baran continue their programme in the Citroën DS3 RRC. Ten crews from the Citroën Top Driver series will also line up for Rally Italia Sardegna.


Were you pleased to have finished as runner-up at the Acropolis Rally?


“Yes, I really needed this kind of result. After a bit of a crazy first stage, I found myself in a good position. Insofar as Mikko had ran into problems, the team asked me to control my pace. I raced for the rest of the rally with this in mind and we were pleased to get back onto the podium and pick up good points for both championships! It was important, first and foremost, to secure this second place, before then aiming higher.”

Are you therefore aiming to win in Sardinia?


“On paper, it’s my kind of rally. I like it when the car, the tyres and the surface combine to give you a good level of grip. We have done quite a lot of work on this with the team. After Portugal and Greece, Sardinia provides us with a chance to confirm the progress we have made. But before thinking about winning, you need to produce the perfect performance and get through several stages: feel confident with the car, set a good time in qualifying to have the best possible starting position, put together a series of stages without any mistakes, etc.”

Among the current crop of WRC drivers, you are the most popular on the various social media. Do you know where this popularity stems from?


“I try to share little bits of my life with my fans, at rallies and elsewhere. You’re right, there are a lot of people who follow me on Facebook and Twitter. Sometimes, I am quite surprised by how much interest can be generated by a simple photo! In order for my contributions to remain spontaneous, I express myself mainly in my native language and that is very much appreciated by the Spanish-speaking community throughout the world.”

Evans steps in for Al-Attiyah to claim debut in Sardinia