After a break over the last few weeks, the World Rally Championship returns to action in Finland. At their home rally, flying Finns Mikko Hirvonen and Jarmo Lehtinen will be aiming to claim another victory. The Citroën Total Abu Dhabi WRT will also be looking to Dani Sordo and Carlos del Barrio to help it come away with a hatful of points from the land of a 1,000 lakes. Competing in the DS3 WRC of the Abu Dhabi Citroën Total WRT, Kris Meeke and Chris Patterson are also determined to do well in their first WRC appearance this season.

After passing the half-way stage of the season in Sardinia, the WRC enjoyed a holiday of just over five weeks. The championship resumes at one of the most iconic rounds of the season, Rally Finland and its legendary jumps!

Originally from Jyväskylä, the base for the rally, Mikko Hirvonen really is the local boy. Having already competed here eleven times, winning the rally in 2009, he is now considered to be one of the event’s ‘old hands’. After making a start to the season that has fallen short of his expectations, the four-time World Championship runner-up is really determined to make a fresh start here. “There are several reasons why I would like to win my home rally,” explained Mikko. “First of all, it would be the best way of thanking the fans who have supported me throughout the year. It would also be just rewards for the team, which has made every effort possible since the start of the championship. And it would also give us a bit of momentum going into the final part of the season…” 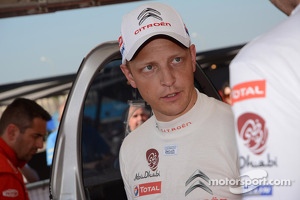 Although the surface in Finland isn’t the most naturally-suited to southern European drivers, Dani Sordo seems to be quite happy to be racing on these compressed gravel roads, where his best results are two fourth-placed finishes: “I’m really motivated for the second part of the championship, because we are about to start the series of rallies at which I feel most comfortable. In Finland, I like the fast roads and the fact that the grip is fairly consistent. The difficulty lies in the difference in speed between the runs in recce and the actual race. Contrary to popular belief, there are almost no huge jumps here. It’s rather that there is a succession of small crests, which lift the car off the ground to a greater or lesser extent and which are often followed by blind corners! I hope to set times that are on the pace of the leading guys. A podium finish would be a good result for Carlos and me.”

In the third DS3 WRC, Kris Meeke makes no secret of his delight at being able to compete in the event in the current, double World Championship-winning car. After competing here four times in a Super 1600 – twice in a Citroën C2 – the Northern Irishman took part in the rally in a WRC in 2011. It will therefore not be a leap into the unknown: “My main goal has always been to get back in the World Championship. Citroën Racing and Abu Dhabi Racing have undoubtedly given me the greatest opportunity of my career! This rally is exhilarating for drivers, but it’s also one of the most difficult. I’ll be looking to improve throughout the three days and finish in a strong position.”

In order to prepare for their return to action at this event as well as possible, the three Citroën Racing crews arrived in Finland early to complete a test session. “It’s the perfect way to get back into the swing of things and build your confidence after a few weeks out of action,” confirmed Dani Sordo.

Rally Finland is due to start on Wednesday evening with the qualifying stage. Thursday’s first leg will be short, with less than 50km of timed sections. The race will get underway properly on the two long legs on Friday and Saturday.

Could you possibly be aiming for anything other than the win in Finland? “No, although having said that, I wasn’t dissatisfied to finish as runner-up last year. Seb and I fought hard all the way, right from the word go, with neither of us holding back at all and without any team orders. I lost a bit of time at the start of the race and I never managed to make it up, even with two perfect runs on Ouninpohja. That just goes to show how you need to be at 100% from start to finish if you want to win in Finland. This year, I’m going to give it everything.”

It would be a good way of getting your bid for the championship back on course… “For the time being, my thoughts are mainly on the Manufacturers’ championship and I think we need to focus on that goal. Sure, the team is 46 points behind, but there are still 258 points up for grabs. If we are going to close the gap, we can’t be content to finish second or third place; we need to win races.”

Some of the stages are being run in the opposite direction to previous years. Will that be an advantage for you? “No, I don’t think it makes much difference. The eight or nine leading drivers are well prepared and the two recce runs – plus the work done using video footage – should be enough for them to get close to the limit in the race itself. There’s certainly no room for hesitancy and you have to be flat out all the time, but I think the usual preparation work will count more than any local knowledge of the roads in enabling me to do well here.”