Citroen's Loeb holds second on leg one of Rally Sweden 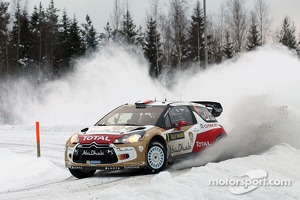 Anyone hoping to end day one of Rally Sweden among the leaders certainly needed good turn of speed and some experience on these roads, but they probably needed a few acrobatic skills too! Lying in second position, half a minute behind the leader, Sébastien Loeb and Daniel Elena made a strong start to this year’s event.

Rally Sweden got underway on Thursday evening with the traditional super special stage. After winning the Karlstad racecourse stage, even if it was only by half a second, Sébastien Loeb went to bed having grabbed the early overall lead.

Well before dawn, the competitors left the parc fermé to head for Hagfors, around a hundred kilometres to the north. After a service period, the drivers set off into the forests of Värmland for a three-stage loop.

Drama struck within a few kilometres of the start of Lesjöfors 1 (SS2). One of the leading contenders to win the rally, Mikko Hirvonen was the first to run into trouble. “It happened barely a kilometre after the start, in a section which wasn’t particularly difficult,” said Mikko. “The rear end lifted up and the car started to slide towards the verge, where what should have been a snow bank had been flattened by another car. We span before getting stuck in a snow bank. There weren’t any spectators at that point and so it took us a lot of time before we were able to get the car back onto the road.” Having lost 24 minutes, it’s now a very different-looking race for the Finn: “I’m now going to drive without taking any risks to try and pick up a few points for the Manufacturers’ championship. I’ll also try to score some points in the Power Stage.”

Third fastest on SS2, Sébastien Loeb confirmed how difficult the Swedish course was proving: “There is a fresh layer of snow which is swept off the line as the cars run through the stages. When we’re on the line, things go well. But as soon as the rear end drifts off the line a bit, the studs no longer bite into the ice and it becomes difficult to stay on the road. I still have to maintain an aggressive pace, otherwise I’ll end up going slow!”

Second overall at the day’s mid-way point, the nine-time World Champion was fighting with Jari- Matti Latvala, who moved ahead of him after Lesjöfors 2 (SS5). The Citroën Total Abu Dhabi WRT driver kept pushing however, and he reclaimed second spot on Vargåsen 2 (SS7). Trailing the leader by half a minute, Seb was realistic in his appraisal: “I’m pushing but I can’t do much more about Sébastien Ogier. There’s no doubt that my starting position wasn’t so good today, but that doesn’t account for everything. For the time being, I’m not thinking about closing on the leader, I’m more focussed on defending my second place!”

Khalid Al Qassimi had a very tough time in his first rally in the DS3 WRC of the Abu Dhabi Citroën Total WRT. “The day got off to a bad start, as we got stuck in a snow bank on SS2, when we hit the spot where Matthew Wilson went off,” recounted the Emirati driver. “And then I did it again – just me this time – on SS5. The conditions are really complicated this year. I’m struggling to find the right feeling and I still lack experience with the car.”

After going off on Värmullsåsen 2 (SS6), Dani Sordo added his name to the list of drivers caught out by the tricky Swedish course. The Spaniard slipped out of the top 10 as a result: “It was pretty much the same as everyone else, we lost the back end and we ended up stuck in a snow bank. Fortunately for us, there were a lot of spectators and we were able to get on our way again pretty easily. It really hasn’t been a straightforward day. I never found the right feeling with the car.”

“Obviously, things haven’t really worked out like we had hoped,” admitted Yves Matton, Citroën Racing Team Principal. “Mikko fell out of contention very quickly, but that’s part and parcel of racing, taking risks when you’re going for the win. However, I’ take heart from Seb’s performance. There were just a few seconds between him and Latvala, who is undoubtedly one of the best on this surface. We still don’t know how much of a handicap our starting position was. It will be easier to compare tomorrow, as Seb will be running just before Sébastien Ogier.”