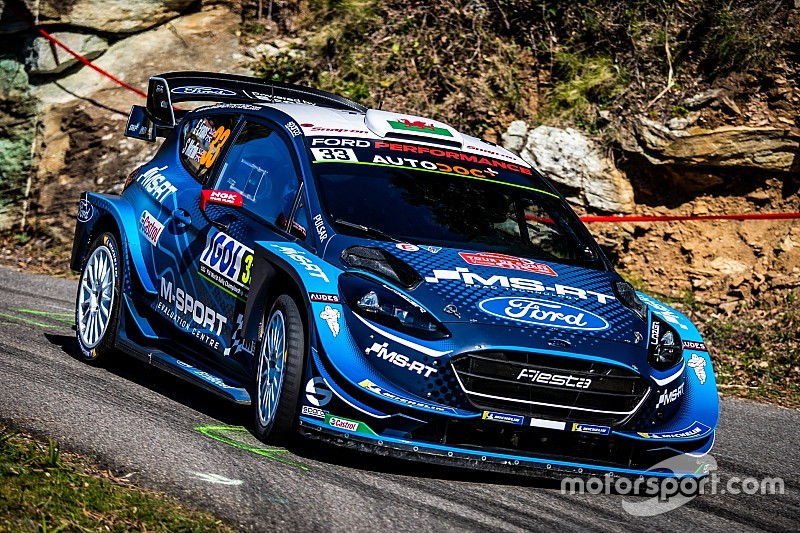 Neuville overhauled Evans on the final on Saturday to establish an overnight lead of 4.5 seconds, taking 16s out of his rival in one test.

However, Evans was to reverse that trend on Sunday morning, taking that same 16s out of Neuville to regain the 11.5s advantage he had late on Saturday afternoon.

Evans dominated the stage, taking 8.8s out of everybody, while a bemused Neuville admitted he "didn't know" how he dropped so much time.

Sebastien Ogier and Dani Sordo began the test separated by just 5.1s in third and fourth, but defending champion Ogier emerged it with a comfortable 28.1s cushion as Sordo's Hyundai i20 developed brake issues.

Ogier was still slightly uncomfortable with the set-up of his Citroen, and admitted "it would be a surprise" for him to win the power stage as he hasn't won a test all weekend.

The Finn "has had the monkey on his shoulders" this weekend telling him to ensure he brings his car to the finish, but he was unleashed on Sunday morning's opening test, only losing 1.6s to the chasing Ott Tanak.

Tanak is down in sixth after his puncture on Saturday afternoon. The Estonian has M-Sport's Suninen in his sights as he looks to salvage as many championship points from the weekend as possible.

Tanak will have his work cut out however, as he trails Suninen by 20.8s.

Citroen's Esapekka Lappi has spent the majority of the Tour of Corsica confused by his pace and the handling of his C3 WRC.

Toyota teammates Kris Meeke and Latvala prop up the leaderboard heading into the final stage of the rally.

Meeke set a leisurely pace through the stage in a bid to save his tyres for the power stage.

His advantage over Latvala, who also completed the test at a "relaxed" pace, is comfortable at just under a minute and a half.