The season draws to a close in Wales

The 2013 World Rally Championship concluded today in Wales. The only Citroën Racing crew still in the race, Dani Sordo and Carlos del Barrio made it to the end in seventh place. The Citroën Total Abu Dhabi World Rally Team finished as runners-up in the Manufacturers’ championship, whilst Mikko Hirvonen and Dani Sordo ended fourth and fifth respectively in the Drivers’ standings. 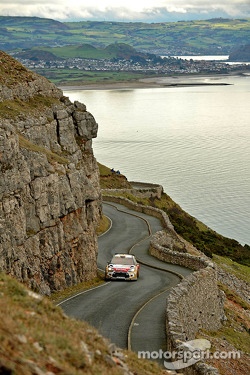 This fourth and final day of racing featured six stages, three of which were held in the famous Welsh forests. Somewhat isolated in seventh position overall, Dani Sordo and Carlos del Barrio’s only goal today was to guide their DS3 WRC safely to the end of the final round of the season. Erring on the side of caution, the Spanish crew also decided to take two spare tyres with them for this final leg, which was completed without any service period.

“Although we weren’t pushing really hard, we still enjoyed driving our DS3 WRC,” confirmed Dani as he arrived at the podium. “These very fast stages are fun to drive when the grip is as good as it was today. It was important for me to complete a gravel rally without making any mistakes and by building up my confidence with each of the stages.”

Winner in Germany and with three podium finishes, Dani Sordo ended the year in fifth place in the Drivers’ World Championship, three points behind Mikko Hirvonen. The Finn finished in the top three on five occasions this season. With two wins (Monte-Carlo and Argentina) and one runner-up spot from four rallies, Sébastien Loeb finished seventh.

Thanks to the points scored by the three nominated crews, the Citroën Total Abu Dhabi WRT finished as runner-up in the Manufacturers’ World Championship, whilst the Abu Dhabi Citroën Total WRT claimed sixth position.

“Although we have lost our titles, this weekend’s actual result doesn’t really tell the story of our season. We have been quick at pretty much all of the rallies, but we’ve often been unlucky not to convert that speed into results,” assessed Yves Matton, Citroën Racing Team Principal. “I would like to reiterate my congratulations to the 2013 Champions 2013 and thank Dani and Carlos for having ensured one DS3 WRC finished the rally. Well done also to Robert Kubica and Sébastien Chardonnet, who have secured the WRC2 and WRC3 titles for Citroën. The curtain falls on a pivotal season and we will now quickly turn our attention to 2014. There are many possible options as regards the drivers of our DS3 WRCs. We’ll take the time needed to finalise the discussions before announcing the line-up of our team for next season.”