Dani Sordo back on the podium at Acropolis Rally 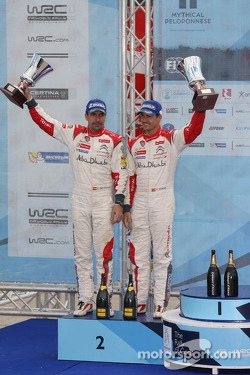 The third and final leg of the Acropolis Rally was also the ‘easiest’. Held on roads not far from the service park, the Pissia and Loutraki tests – each run twice – were a lot smoother than the stages contested on the first two days of the event.

Holding the same position since Friday evening, there was little point in Dani Sordo changing his strategy for the final day. While managing his lead over the third-placed driver, looking after his car and his tyres in the process, the Spanish driver made no attempt to set any really fast times. Following the third position secured at the season’s opening round in Monte-Carlo, he claimed his best result of the year. It was also the twentieth time he has finished as runner-up in 104 WRC rallies.

“We didn’t fight for the win, we had to be content with driving in the lines without taking any unnecessary risks”, he explained. “I’ve been on a poor run of results, finishing out of the points in three of the last four rounds. So, second place is a morale-boosting result and means that we score points that we really needed. I hope that this result will enable me to feel more confident and reach new heights, starting with Rally Sardegna.”

Equally isolated in the overall standings, Mikko Hirvonen held onto his eighth place: “We were really unlucky and it’s not a good result for us. But these things happen in motorsport. We have to stay positive, focus on the next event and hope that our luck changes…”

“Dani produced a performance entirely in line with our expectations”, commented a satisfied Yves Matton, Citroën Racing Team Principal. “We asked him to secure the best possible result without taking any risks, and that exactly what he did, from start to finish. The technical problem that affected Mikko’s car at the start of the race prevented us from taking full advantage of what might otherwise have been a very good opportunity for the Manufacturers’ Championship. It’s a shame, but he managed to make it to the end and pick up a few extra points, which may prove vital at the end of the season.”

Scaling Mount Olympus in Greece: victory for Latvala and Volkswagen