Dani Sordo moves ahead on leg 3 in Rallye Deutschland

The Citroën Total Abu Dhabi World Rally Team crews enjoyed a strong third leg at Rallye Deutschland on what proved to be a very closely contested day. Dani Sordo and Carlos del Barrio now lead the rally, although they are only 8/10ths of second ahead of their closest challengers. Mikko Hirvonen and Jarmo Lehtinen hold the final podium place in the provisional standings, which suggests the team is on course for a great overall result. 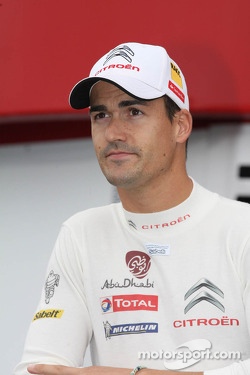 Leaving behind the banks of the Mosel, the rally headed into the countryside of the Rhine region for the third day of racing. As the roads were dry, all the drivers opted to fit hard Michelin Pilot Sport tyres for the morning’s stages. Dani Sordo set about reminding everyone else that he had not given up hope of making up the 25-second gap to the lead by going fastest among the frontrunners.

And on Arena Panzerplatte, the Spaniard struck a mighty blow. After the 41km-long stage through the Baumholder military base, Dani had cut the gap to second place to just 9s. At the midday service, he confirmed his good form: “Although some corners were slippery, I didn’t think the conditions were particularly difficult. I felt confident, totally at ease in the car. I took a few risks on Panzerplatte to get the maximum out of the tyres.”

Despite an unwelcome detour into a field on SS10, Mikko Hirvonen held firm in fourth position: “I tend to be quite cautious on the dirtiest sections, because I have more to lose than to gain, given the time differences. I’m still driving at a strong pace and I feel I’m getting better, little by little.”

Forecast to fall yesterday evening, the rain finally put in an appearance during the midday service. All the crews therefore opted to go with soft tyres for the afternoon. As the conditions became trickier than ever, Dani Sordo’s confidence kept growing. Whilst Latvala retired after going off the road, the Citroën Total Abu Dhabi WRT driver closed the gap to Neuville to just 1.1s! On the next test, he grabbed the overall lead after claiming another stage win.

The second run on Arena Panzerplatte was cancelled after an accident involving a historic car taking part in a non-competitive demonstration. All the crews therefore headed back to Trier after SS13. “Obviously, like everyone in the team, my first thoughts go to the families and friends of the two crews members who were involved in this terrible accident,” commented Dani Sordo. “As regards the rally itself, I’m pleased to have been the quickest when the conditions were at their most difficult. We’re now in front, but the lead is less than a second. I’m going to remain totally focussed in order to tackle the final two stages in the best possible frame of mind. It’s going to be a great scrap tomorrow!”

As the hypothetical threat of Østberg disappeared completely when the Norwegian went off, Mikko Hirvonen was left somewhat isolated in the standings. “After finishing on the podium at my last five tarmac rallies, I’m going to try and keep the run going by bringing home this result,” confirmed the Finn. “We got through a difficult day and we’ll need to do the same thing tomorrow. Hopefully, we can secure a great result for the entire Citroën team.”

Now ninth overall, Khalid Al Qassimi was relieved to have made it to the end of the leg without incident: “It was all the more difficult because I had no experience in conditions like these. Even in my normal, everyday life, I’ve never driven in such heavy rain! I was extremely cautious in order to make it the end of the day without damaging the car.”

Leader of the WRC2 category this morning, Robert Kubica enjoyed a magnificent duel with Elfyn Evans throughout the leg. The DS3 RRC driver reclaimed the lead after SS13: “Yes, it was a good fight today, but for the time being, the results are not really what count most for me. I still have a lot to learn, not least about these conditions, where the grip is very different from one corner to the next.”

“Although our feeling of satisfaction is tempered by the circumstances, it has been a long time since we had such a positive day, with Citroën crews leading the overall standings as well as the WRC2 and WRC3 categories,” emphasized Yves Matton, Citroën Racing Team Principal. “Dani produced the kind of performance that we expected of him, showing total control in his driving on the tarmac. Mikko also produced a strong performance today, keeping out of trouble on these tricky stages. There are two long stages left to contest tomorrow to secure this result.”