By completing the Argentina Rally, the driver from the BWRT Team met its goals and surpassed hundreds of kilometres of specials that gave rhythm and confidence for the future.

Finishing in the 12th position in Argentina Rally, Daniel Oliveira equalled his best result in the WRC, recorded last year in Portugal.

In a demonstration of the evolution observed during the Rally Argentina, Daniel Oliveira not only improved, in most cases, their time in the second passages, as generally decreased differences for faster, a clear demonstration of progress shown throughout the rally. 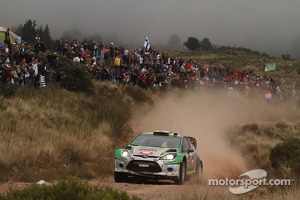 By completing the Argentina Rally, the driver from the BWRT Team met its goals and surpassed hundreds of kilometres of specials that gave rhythm and confidence for the future.

At the end of the race, Daniel Oliveira did not hide his satisfaction «to have finished the race, equalling my best result in the World Championship, and after all we had to face, leave here with redoubled confidence and ready to face the new challenges». Meanwhile, Carlos Magalhães considered that «the day started well, but for the second passages we changed the tires and the suspension, but the effectiveness is no longer the same as we had been in the morning».

For Manfred Stohl, the Team Director, «the balance is very positive and I have only to regret the mistake of the first day, which should not have happened.

But yesterday and today I was very pleased with the work done by Daniel, who throughout the rally was always improving the times, which is a good indication for the future».

Future that takes place in the Tour of Corsica within 15 days.