Sébastien Ogier, Julien Ingrassia are at the top of the leader board in the Rally Spain after the first of three days.

World Champions and now also confirmed night owls – Sébastien Ogier, Julien Ingrassia and their Polo R WRC are at the top of the leader board in the Rally Spain after the first of three days. Having scored all three possible best stage times in pitch darkness, the new holders of the Drivers’ and Co-Drivers’ titles in the FIA World Rally Championship (WRC) are 8.8 seconds ahead of their Volkswagen team-mates Jari-Matti Latvala/Miikka Anttila (FIN/FIN). Asphalt specialist Daniel Sordo (Citroën) is in third place. Andreas Mikkelsen/Mikko Markkula (N/FIN) in the third World Rally Car from Wolfsburg finished the first 61.75 of 355.92 SS kilometres sixth in the overall standings. All three Volkswagen duos put in a successful night shift on Friday: Ogier/Ingrassia won all three Special Stages and Latvala/Anttila were always in the top three. What’s more, Volkswagen took all three top spots in the third Special Stage, “Riudecanyes 1”. 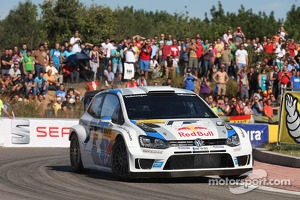 The members of the Volkswagen team won’t get much sleep tonight. Back at the service park in Salou, it is time for the so-called flexi-service with 45 minutes allocated per car. This has to be completed by 02:15 hrs. The mechanics will be back at work at 08:15 hrs on Saturday to perform the first service. Volkswagen need not worry about its crew’s motivation, however: the car maker could secure the manufacturers’ title in the World Rally Championship in Spain. To achieve this, all they need is for either Ogier/Ingrassia or Latvala/Anttila to come at least seventh. The teams face another 155.63 SS kilometres on asphalt on Saturday, followed by 138.54 kilometres – largely on gravel – on Sunday.

Quotes following day one of the Rally Spain


Jari-Matti Latvala, Volkswagen Polo R WRC #7
“We can be very pleased with our first evening because it’s not easy starting a rally in the dark and driving fast straight away. But we managed without any problems and got into a good rhythm. I enjoyed the last stage in particular and upped my speed. You need to be consistently fast to succeed in this rally. That’s still our goal for Saturday, which will all be on asphalt, before we switch to gravel tracks on Sunday. This changeover is one of the special challenges we face here in Spain, just like the darkness this evening.”

Sébastien Ogier, Volkswagen Polo R WRC #8
“The rally got off to a good start for us. I took a somewhat restrained approach to the first stage this evening, but after that we did a perfect job. I just want to enjoy the rally here in Spain and have some fun – and the best way to do that is to go flat out. My aim tomorrow is to extend our lead as much as possible to give us a good chance of winning when we switch to gravel on Sunday.”

Andreas Mikkelsen, Volkswagen Polo R WRC #9
“I might have been a bit too cautious in the first two Special Stages, especially on the fast stretches. But I still enjoyed them. The Polo’s set-up is perfect – it’s definitely the best asphalt car I’ve ever driven. I’ve always liked the third stage and it went really well again today. Third place on that stage is a great result. I’m very pleased with the time I put in. We got our rhythm right and now I hope that we’ll have another good day tomorrow.”

Jost Capito, Volkswagen Motorsport Director
“A great start to the rally for Volkswagen. All three driver/co-driver pairings showed that they were on the ball right from the word go today. The conditions weren’t easy because the Special Stages were held in utter darkness. Nevertheless, Sébastien Ogier and his co-driver Julien Ingrassia have already given themselves a bit of a cushion for the next couple of days. From Volkswagen’s point of view, it’s perfect that Jari-Matti Latvala and Miikka Anttila are their keenest rivals, of course. Andreas Mikkelsen and Mikko Markkula also deserve a massive compliment – they got better and better from one stage to the next this evening. I think the first few Special Stages of the Rally Spain have left everyone wanting more.”