Mads Østberg, Adapta World Rally Team, Ford Fiesta RS WRC (4th) said: “This rally has been up and down for us – first up, and then down. OK, today has been a lot better than yesterday, but still a little bit difficult. 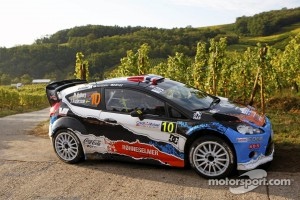 We tried to push and ended up fighting with Ott [Tänak] and Mikko [Hirvonen]. We tried to catch Mikko but it was very difficult.

We came close, but not quite close enough, so unfortunately we were unable to gain back all the time we lost on Saturday.

“But I am pleased to be fourth, and fourth in the championship may be a bit disappointing now, but I know that it is an absolutely fantastic achievement.”

Securing an impressive sixth place finish for the Ford Fiesta S2000 at Rally de España this weekend, Craig Breen was crowned 2012 S-WRC Champion – one year after securing the FIA WRC Academy laurels in 2011.

Craig Breen, Ford Fiesta S2000 (6th) said: “This is such an incredible feeling. To go from [FIA] WRC Academy champion to S-WRC champion in the space of a year is fairly text book I think.

“A couple of months ago my life was turned on its head for all the wrong reasons. I never thought I would be able to get back to where we had been.

But Gareth [Roberts] and I both had a big dream together and with the help and support of everybody I decided to push on and secure that dream for the two of us.

“Now here we are and I am sure he’s here with me. It is a big day for me and I am just over the moon.”

Evgeny Novikov, Ford Fiesta RS WRC (10th) said: “I tell you, this rally has been quite difficult! With the new tyres we had a lot to learn, so I didn’t expect to be fighting where I am used to.

But we have learnt a lot and have managed to get some good experience on all of the stages.”

Martin Prokop, Ford Fiesta RS WRC (13th) said: “It was a shame that we had to retire on the first day, because the rest of the rally went quite well for us and we were setting some good times in the morning.

It was very important for us to drive on these last two days because now we have a lot of information on the tyres – what DMACK have to work on and what they have to develop for next season. So all in all, this rally has not been so bad for us.”

Yazeed Al Rajhi, Ford Fiesta RRC (15th) said: “This rally has been a new experience for me. I have learnt a lot in this rally and now I have finished in third position which is very nice for me.

For sure I will be back next season to try and put all we have learnt into practice and build on the good results we have had this year.”

Daniel Oliveira, Brazil World Rally Team, Ford Fiesta RS WRC (16th) said: “This rally has been good and we have finished with a good pace. These last two days have been good for us and we managed to set some good times – in the top-ten a few times.

OK, it was not a super result because we went off on the first day, but the speed we showed today means that I can end the season on a bit of a high note.”

Karl Kruuda, Ford Fiesta S2000 (23rd) said: “The last two days have been quite OK, but the first one was pretty terrible. We cannot change the past, we just have to be better in the future.

I hope to be back to compete in WRC 2 next year, but there is still a lot yet to confirm. We will just have to wait and see what is possible.”