As the FIA WRC Academy crews embark on the second asphalt round of the season next week, Rallye de France Alsace is poised to be one of the most closely-fought to date.

With championship leader Elfyn Evans capable of mathematically winning the championship*, the Welshman will face stiff competition from his nearest rivals as well as a number of Tarmac specialists hungry for victory. 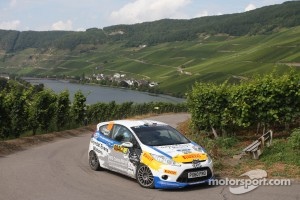 Based in the border-city of Strasbourg, the rally route through the Vosges Mountains is far removed from the open military ranges and broken Tarmac synonymous with the previous round in Germany.

Having to adopt a different style, competitors will tackle 342 km through narrow country lanes interspersed with flat-out speed tests.

With tricky corners that require total commitment and supreme precision, the WRC Academy crews will have to be on top of their game from the city-centre start on Thursday to the close of play on Saturday evening.

Championship leader Elfyn Evans will be hoping to seal the coveted championship crown(*) next weekend, and having piloted the Ford Fiesta R2 to its most impressive finish in a FIA World Rally Championship (WRC) event when he secured 16th place overall on the event last year, few would bet against him.

Partnered by Phil Pugh, the Welshman has elected not to contest the final round of the British Rally Championship this weekend – forfeiting his chance to battle for the national crown in favour of being fully prepared for the Academy’s penultimate round.

After securing the championship laurels in the Fiesta SportTrophy UK series last month, Evans was rewarded with a ride in the Ford Fiesta RS WRC and one-to-one tuition from Ford World Rally Team’s Jari-Matti Latvala and will be hoping that the Finn’s expert advice holds him in good stead as he tackles what could be the biggest event of his career.

Swapping the steering wheel for the commentator’s microphone, Brendan Reeves has spent the time since Rallye Deutschland putting his media skills to the test.

The Australian travelled to Rally Barum to conduct stage end interviews for iRally before joining the Rally Live team for the tenth round of the WRC in Wales.

Reeves also attended the FIA Institute Young Driver Excellence Academy’s final session in Sachsenring and co-driver Rhianon Smyth – who is incidentally leading the Co-driver standings – has been working hard to secure the budget for the brother-and-sister pairing to complete a pre-event test ahead of the French event.

Having secured his maiden WRC Academy win at Rallye de France last year, Alastair Fisher is well versed in what it takes to win on the narrow asphalt roads around Strasbourg and will be a strong contender for the victory as he looks to get his championship campaign back on track.

The Northern Irishman contested Wales Rally GB as a guest driver in the S-WRC earlier this month and, partnered by regular co-driver Dan Barritt in an M-Sport prepared Ford Fiesta S2000, the youngster showed some impressive speed to keep in touch with 2011 FIA WRC Academy champion, Craig Breen.

Fisher will be looking to clinch the victory next week and bring the title fight to the season finale in Spain.

After securing his best result of the year in Germany last month, Tarmac specialist Jose Suárez will be looking to do one better in France as he and co-driver Candido Carerra hunt down their first WRC Academy win.

The Spaniard will contest Rallye Villa de Llanes as part of the Spanish Tarmac Championship this weekend and will be hoping the added competitive seat time gives him the edge as he contests the final all-asphalt round ahead of his home-coming at the season finale in Spain.

Claiming second place on the event last year, Suárez is another driver who knows just what it takes to shine on the French stages.

The break between rounds four and five has been a busy one for Pontus Tidemand. As well as attending the FIA Institute Young Driver Excellence Academy’s final session – in which he and Porsche Carrera Cup driver Jonas Gelzini won the final kart-race – the Swede joined forces with fellow Even Rally supported driver Andreas Mikkelsen, acting as the Škoda UK driver’s weather crew at the Barum Rally in the Czech Republic.

The youngster will be hoping the added running on Tarmac sees him well prepared for the round on his least preferred surface.

Following a strong showing on asphalt last time out in Germany, John MacCrone will be looking to prove his worth once again in France.

Impressing rally fans around the world with his performance on Tarmac, the Scot was leading the event until he bent the rear beam of his Ford Fiesta R2 which put an untimely halt to his leading charge.

Despite losing over a minute to the leaders, MacCrone and co-driver Stuart Loudon recovered well to claim the first podium of the year for Rally Team Scotland.

Working on his fitness and pacenotes ahead of the penultimate round of the season, the Scot will be well placed for a podium and will be a strong favourite for a class victory when he contests his home-event at the Tunnock’s Mull Rally the following week.

Narrowly missing out on a podium in Germany, Timo van der Marel and co-driver Erwin Berkhof will be hungry for a taste of Champagne next week.

The Dutchman has had a busy few weeks since Rallye Deutschland – attending the final session of the FIA Institute Young Driver Excellence Academy and contesting the Conxion Omloop van Vlaanderen Rally in Belgium to prepare for the narrow asphalt roads of Rallye de France.

Van der Marel also participated in Gymkhana Grid Europe when the series visited his native Holland. Claiming second place, the Dutchman has qualified for the finale in the UK where he will be rubbing shoulders with the hoonigan himself, Ken Block.

Elsewhere, when not behind the wheel of his Ford Fiesta R2, Fredrik Åhlin has been continuing his work as a driver trainer with Audi and is currently in the UK putting the Audi R8 through its paces at Silverstone.

With help from his sponsor, TrainingPartner, Åhlin also completed an asphalt test ahead of Rallye de France on a newly built track close to Stockholm Arlanda airport and he and co-driver Morten Erik Abrahamsen will be hoping the added training translates their clear speed into some strong points on the penultimate round of the season.

With a whole host of drivers capable of claiming victory on the thrilling mix of forest, mountain and vineyard stages that make up the fifth round of the season, the WRC Academy – supported by Ford Racing in Europe and with control tyres from Pirelli – is once again set to provide some of the most competitive rallying in the field.

Elfyn Evans (GBR) said: “For me, the championship is still wide open – anything can happen and there are a lot of quick guys in the field.

We won’t be thinking too much about the championship on the rally itself, it will be just be about doing a good job and getting through the stages. We will just have to see where we are at the midday point and judge our pace and approach from there really.

“We did France last year and got a really good result so hopefully we will have another good run this year. I really enjoy the stages but last year it was totally dry.

OK, there was quite a bit of dirt and gravel that was pulled onto the stages, but if it rains this year I think we could be in for a really tricky event. It really will be anybody’s game!”

Fredrik Åhlin (SWE) said: “The feeling is pretty good ahead of this event. OK, our championship campaign is over and we have not had the best of luck this season, so this rally will be all about trying to regain some confidence.

“Of course I am more comfortable on gravel, but I feel that I have really improved my performance on Tarmac. We set some good times towards the end of this rally last year, and I hope we can do the same again this year.

“For us, the most important thing will be to finish and complete all of the stages with no problems. But once we have found our rhythm, we can certainly try and push a little more and just have some fun!”

(*) Subject to the official confirmation of the results by the FIA.

Novikov and Tänak take to the Vosges mountains in France