Jose Suárez said: “I am very happy with this position, but I am not about to lose my head. Tomorrow is a long day and anything can happen.

“I am really looking forward to setting some good times on Tarmac, but the main thing will be to make sure that we keep this position.” 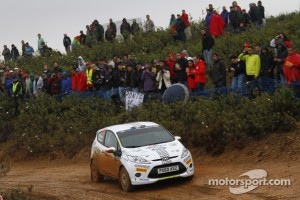 Pontus Tidemand (+ 1:09.6) said: “I am both happy and sad right now! To win five out of six stages was fantastic, but then to lose three minutes with a puncture was such a big disappointment. But we are still in second place which is good.

“Jose [Suárez] is over a minute ahead of us now so I think he will be hard to beat tomorrow, but we will try.”

Elfyn Evans (+ 46.3) said: “It has been a difficult start. It is a relatively new partnership with myself and Seb [Marshall] so it took us a while to settle into a grove. Unfortunately we also had a puncture on SS3 so we found ourselves quite a bit behind at midday service.

“But we refocused and managed to get a second and a fastest time in the afternoon which was good. It put us back in third overnight so hopefully we will be able to challenge for the higher positions tomorrow.”

Brendan Reeves (+ 54.6) said: “It has been a big challenge. It wasn’t so fun this morning because I didn’t have the set-up right for the first two stages [SS1 and SS2].

It was so slippery and the car was just stepping out at the rear all the time – it was like a powerful rear-wheel drive car!

“We changed the set-up and the car felt really good for the long stage [SS3] but about 12 km from end there is a small water splash and we hit some concrete just after that and got a puncture.

Then we waited for Jose [Suárez] to go past, caught him and got stuck behind him for about 10 km so we lost a lot of time there too.

“This afternoon we went with a similar set-up. The first stage [SS4] was good, until we went off the road on a muddy section towards the end.

So, on the long stage [SS5], we just decided to play it smart and make sure we had a clean run through.

“We’re not where we want to be at the end of the day, but at least we are still here.”

Then on the first stage after service [SS4], I was one of the only drivers who had rain so me and Timo [Van der Marel] were about one-and-a-half minutes slower than everybody else.

OK, it was not my fault, I can’t control the skies, but it was very disappointing. Then on the long stage this afternoon [SS5], we had to avoid a lot of cars so we just backed right off.

“It is disappointing because everything was going really well. Unfortunately when bad luck strikes you again, you just seem to lose all motivation. But we will move on, and tomorrow will be a completely a new rally for us!”

Aron Domżała (+ 5:16.7) said: “I am very happy to have finished my first day in the WRC. My pace is not so good – the road was really slippery and I have never competed in such a difficult rally before.

But I am very happy to be here. I am used to the Fiesta in the Polish championship, but here it is a little bit different and I think I was maybe a little too eager and went a little bit too hard today.”

Nikara shines as the rain pours over Catalunya