Finland Day 2: Citroen drivers give it their all

After getting back into contention for the win, once again Mikko Hirvonen and Jarmo Lehtinen found themselves short on luck. Fourth overall, the Citroën Total Abu Dhabi WRT crew will be trying to make it onto the Rally Finland podium on the third and final leg. 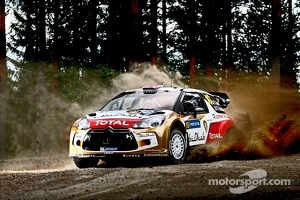 Day two of Rally Finland served up a very full schedule, with two runs on four long stages – Jukojärvi, Palsankylä, Mökkiperä and Lankamaa – and one run on the Killeri super special stage. In total, the distance of the timed sections was three times that covered on yesterday’s stages.

For Mikko Hirvonen, today’s leg provided him with a great opportunity to make up the time lost on SS5, when he was caught out by a heavy downpour that fell “right in front” of his DS3 WRC.

The Citroën driver made his intentions clear from the word go, pushing hard on SS7. He went fastest on the 22.5km-long stage, still wet from the overnight rainfall, to reduce his deficit on the leader to just 4.5s.

Challenging for the top times throughout the morning, Mikko moved into third position after SS9. After arriving in Jyväskylä for the midday service, he wasn’t entirely satisfied, however: “We’re back in the fight for the lead, but it is still very difficult to catch the leading guys! I lost a bit of time on Lankamaa, which we ran in the opposite direction to recent years. I was a little bit too optimistic in my pace notes… I’m expecting it to be difficult this afternoon, as the roads are breaking up pretty badly.”

After starting the day in sixth, Kris Meeke had gained a place by the end of a very eventful morning: “On SS8, I drove for about ten kilometres behind Novikov, who had gone off. He wouldn’t let me past and my windscreen got broken by the stones kicked up by his car. I also went off because I couldn’t see properly through the windscreen, and picked up a puncture. Then, I injured my finger whilst I was changing the tyre. That’s quite a bad run…”

Eighth overall, Dani Sordo’s morning was quieter than his team-mates. The clear improvement made throughout the morning provided the Spaniard with some encouragement: “Finally, I enjoyed driving the car. My times are still not very good, but I can see that I have made significant progress compared with yesterday.“

On the second loop, Mikko Hirvonen’s hopes of winning the rally evaporated on SS12. “I ran wide on a corner in fifth gear and we hit an embankment. The car almost rolled onto the roof, but we were lucky to stay on all four wheels,” recounted Mikko. “We were thrown into a 360° spin and punctured two of the tyres. Fortunately, we had two spare tyres.”

The Finn then had to contend with damage to the rear suspension on the following stages. He finished the leg in fourth position, a minute off the lead: “I did everything I could to try and make up the time, but we didn’t really have much luck on our side. Staying positive, we have to consider ourselves lucky to still be in the race. There is still a long day to go tomorrow, so my aim is now to finish in the top three.”

After gradually improving throughout the afternoon, Kris Meeke held onto his fifth position: “We raised the ride height for the second runs and my DS3 WRC handled perfectly in the ruts. I drove pretty well, with the second fastest time on SS13. It was a very good afternoon.”

Dani Sordo confirmed his improving form, also finishing in the top five on SS13: “I was finally able to really go for it. I know the Mökkiperä stage really well and that’s why I was able to push as hard as I wanted.”

Very fast on the second runs of the stages, Robert Kubica held onto second place in the WRC2 category, almost two minutes ahead of his closest challenger. The Pole also holds tenth position in the overall standings.

Neuville and Østberg still flying high on Day 2 in Finland