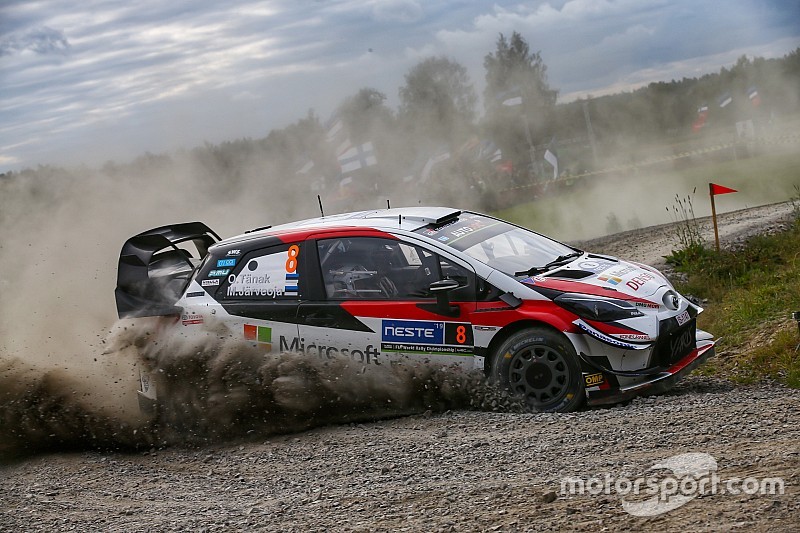 Toyota driver Ott Tanak extended his WRC points lead by easing to Rally Finland victory for a second year in a row, comfortably ahead of nearest challenger Esapekka Lappi.

Tanak began the final day of the rally with 16.4 seconds in hand over Citroen driver Lappi, and extended the gap to 21.1s ahead of the closing Power Stage.

The Estonian topped the 11.12-km test, 0.6s faster than Hyundai driver Thierry Neuville, to score the maximum 30 points and win the rally by 25.6s over Lappi.

Despite only setting the seventh-fastest time on the Power Stage, Lappi was able to hold on to the runner-up spot ahead of Tanak's Toyota teammate Jari-Matti Latvala to secure second, matching his best result as a Citroen driver.

Andreas Mikkelsen (Hyundai) consolidated fourth after setting the third-fastest time on the Power Stage, winning his battle with Sebastien Ogier (Citroen) by 2.7s.

Neuville was promoted to sixth when Hyundai stablemate Craig Breen took a 20s penalty for checking into the start of SS22 late, although the Irishman maintained seventh place.

Teemu Suninen was eighth in the sole surviving M-Sport Ford, as teammate Gus Greensmith crashed into a tree on SS21, ending his rally prematurely.

That promoted WRC2 winner Kalle Rovanpera (Skoda) to ninth overall, while the final place in the top 10 went to another Fabia R5 driver, Nikolai Gryazin.

There was further drama for the third Toyota of Kris Meeke, who crashed for a second time in the rally after clipping a rock on the inside of a left-hander on SS21.

Tanak now leads the standings by 22 points over Ogier with five rallies to go, with Neuville 25 behind the Toyota driver.