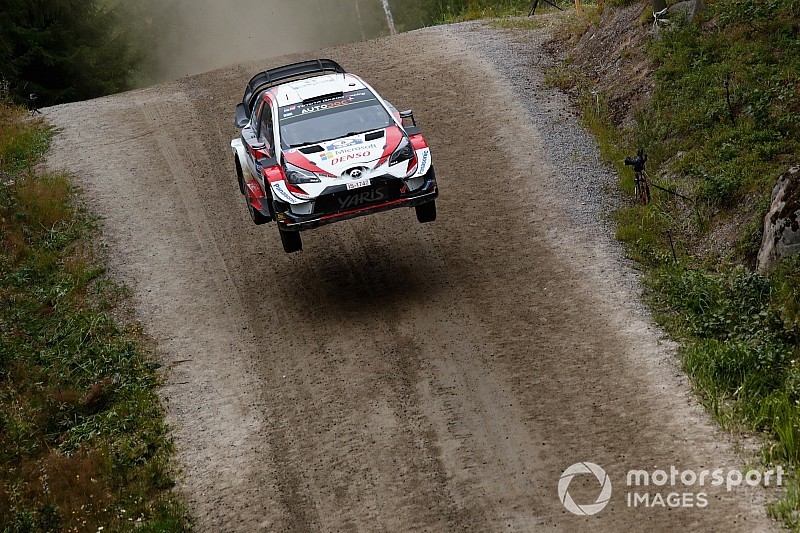 WRC points leader Ott Tanak will take a 16.4-second advantage into the final day of Rally Finland after edging away in the Saturday afternoon loop of the Jyvaskyla-based event.

Tanak took just one stage win but extended his lead over Citroen’s Esapekka Lappi to move to within touching distance of a second consecutive victory in Finland.

Lappi is now a comfortable second behind Tanak following two stage wins, on the second passes of Pihlajakoski and Kakaristo (SS16 and SS18).

The Finn, in his best showing of the year so far, gapped Toyota's Jari-Matti Latvala by 6.4s on SS16 and then a further 5.6s on SS18 to build a gap of 12.4s heading into Sunday.

Keen to avoid a repeat of his morning misfortune, Latvala admitted to backing off in his pursuit of Lappi and concentrate on securing points for Toyota’s manufacturers’ title ambitions.

“I cannot afford to make any mistakes now and I need to bring the car home for the manufacturers’ title,” Latvala said after Toyota team principal Tommi Makinen criticised both Latvala and teammate Kris Meeke for “forgetting what the target was for this rally.”

Latvala remains third and is easily ahead of the battle for fourth place, currently headed by Hyundai’s Andreas Mikkelsen.

The Norwegian held a 1.5s lead over six-time world champion Sebastien Ogier heading into the afternoon, but lost three seconds to the Citroen driver after avoiding a “huge rock in the middle of the road” on SS16, handing Ogier the place.

Ogier then extended his advantage to 2.8s on SS17, Paijala 2, but the tables were turned on SS18 as Mikkelsen beat Ogier before consolidating a 2.6-second advantage by the end of the loop.

Behind the squabbling pair is Hyundai's Craig Breen, who remains just six seconds behind Ogier.

Thierry Neuville’s quiet rally continues in seventh, with the Hyundai driver still feeling the pain of running third on the road. The Belgian is 23.1s behind Breen, but over 40 seconds clear of the M-Sport Ford Fiesta of Teemu Suninen in eighth.

Suninen is two minutes up on teammate Gus Greensmith who fared better in the afternoon following a “disastrous” set-up choice in the opening loop.