Mikko Hirvonen and Jarmo Lehtinen ended today's gruelling opening leg of the Acropolis Rally in third place for Ford Abu Dhabi World Rally Team. The Greek encounter is famed as the toughest round of the FIA World Rally Championship, but their Ford Fiesta RS World Rally Car emerged unscathed from the rock-strewn mountain tracks north of Athens to lie 55.3sec from the lead.

Team-mates Jari-Matti Latvala and Miikka Anttila were second throughout the day in their Fiesta RS WRC. However, transmission troubles cost almost 3min 30sec during the final speed test and the Finns returned to the rally base in Loutraki in eighth.

Thunderstorms deluged last night's start ceremony beneath the famous Acropolis in Athens, but clear skies and hot sunshine greeted competitors this morning. They restarted from Loutraki and headed north around the Gulf of Corinth, tackling one special stage en route before three more on the flanks of Mount Kallidromo. Two more tests on the return journey completed the 141.33km of action.

Surviving the rocky gravel roads in temperatures that neared 35ºC was as important as outright speed. Competitors had only a mere 15-minute service zone in the coastal town of Kamena Vourla after the opening two stages, in which only parts carried in their rally cars could be used to make any necessary repairs.

Hirvonen reached the respite of service in third, after being fifth through the opening stage. "I hit a bank near the end of the first stage and was worried I may have punctured a tyre, but it was fine," explained the 30-year-old Finn. 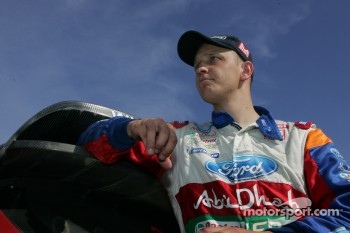 He dropped to fourth in the penultimate test but regained a provisional podium place through the final stage. "I'm happy with the day and I believe third will be a good position in the start order tomorrow. The set-up felt good and my only difficulty came on the final two stages when the handling felt unpredictable. It was a hard day and there are still two more long, tough days to go," he said.

"I must fight hard tomorrow, but I also need to think about championship points as much as winning the rally. I need to take points from Sébastien Loeb and that's a priority over risking everything to win. There is a 10km section which is so rough that I will need to drive carefully to simply survive it. The roads generally are softer, so the second pass in the afternoon will be hard," added Hirvonen.

Latvala was second after the opening two tests. "The opening stage went well and I quickly found a good feeling with the car, despite a couple of small mistakes," said the 26-year-old. "I was confident going into the next test but I couldn't find the same kind of rhythm. The last time I drove those roads was in 2003 and I couldn't remember them. It was a hard stage to recce and perhaps my pace notes were too hesitant.

Latvala remained second, just 29sec from the lead, until his recent run of bad luck continued at the start of the final stage. "When I turned onto the gravel road about 500 metres before the start I realised there was a problem in the transmission. I checked the differentials before the start but didn't have time to do anything more.

"For most of the stage I had rear-wheel drive only, but in the high-speed sections there was drive to the front in places. There was no warning and I'm so disappointed. The forces were against me today and I feel unlucky at the moment. This is a tough event and two years ago I had a problem and fell down the order. But I recovered to finish on the podium, so tomorrow I will push again," he added.

Ford Abu Dhabi team director Malcolm Wilson confirmed the problem on Latvala's car was related to the transmission, but said that it wasn't clear what the exact cause was. The team replaced the entire transmission system on the car during this evening's service in Loutraki.

"We were in a strong position and ideally placed before Jari-Matti's setback," said Wilson. "Our strategy was working perfectly. Mikko has enjoyed a great day and is in a good position for what will be another demanding leg tomorrow. Many drivers have encountered problems and I'm sure there will be more before Sunday's finish."

The second day journeys west across the spectacular Corinth Canal for two groups of three identical stages in the Peloponnese peninsula. The leg ends with a final stage close to Loutraki which will be held in darkness. Drivers leave the town at 10.00 and return at 22.56 after 141.89km of competition.