Ford World Rally Team’s drivers have prepared for this week’s opening pure asphalt round of the FIA World Rally Championship in Germany by fine-tuning their sealed surface technique at a race circuit in France. Jari-Matti Latvala and Petter Solberg covered almost 1000km of driving, during which they received expert tuition ahead of Rallye Deutschland (23 - 26 August). 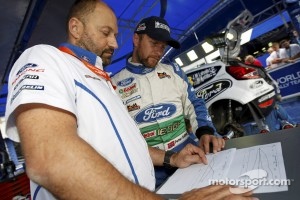 The four-day session at the Circuit des Ecuyeres in Fary allowed both drivers to sample their Ford Fiesta RS World Rally Car in wet and dry conditions around the 3km track. With wet weather a constant threat on the speed tests near Trier, close to the Luxembourg border in south-west Germany, the conditions provided perfect preparation for what the team might encounter on the rally.

“Using a circuit gave us a consistent location in which we could learn more about the Fiesta RS WRC in asphalt set-up,” explained team director Malcolm Wilson. “Driving on the same stretch of track enabled us to understand accurately how small modifications to the set-up of the car affected its handling and performance.”

Although the season-opening Rallye Monte-Carlo was based on the asphalt roads of the French Alps, snow and ice and the use of studded tyres made it a specialised rally. Rallye Deutschland, which this year celebrates its 10th anniversary in the WRC, is the first fixture since then to use asphalt and is regarded as the first traditional sealed surface round.

It is the first of three predominantly asphalt encounters in the final five rounds, and perhaps the most difficult. The threat of inclement weather combined with the ever-changing characteristics and surface of the special stages makes this one of the most unpredictable rallies of the year.

The stages cover three vastly different types of road. Bumpy, narrow tracks among the vineyards on the banks of the Mosel river comprise the first and third legs. Fast sections linked by sharp hairpin bends trace an undulating route as the roads zig-zag across the hillsides among the grapes. Overhanging vines frequently hide corners and it is hard to find a rhythm over the artificial tracks.

The public roads that wind through the Saarland countryside in the second leg are faster and more flowing, but the wooded tests can be treacherously slippery in the wet.

However, the Baumholder military land, used by US soldiers for tank training, provides the sternest challenge. Wide asphalt contrasts with bumpy and abrasive concrete, which demands high durability from Michelin’s tyres. The slightest mistake can be punished by high kerbstones, known as hinkelsteins, which line the roads to keep the tanks in position. The tracks are always dirty, a mix of sand and gravel making them slippery in both the dry and wet.

Latvala, partnered by Miikka Anttila, has good experience of the rally after eight previous starts, and says his much-improved asphalt form and recent tests have left him well-prepared for its demands.

“I’ve never been as competitive on asphalt as I was at the end of last year, and that gives me a lot of confidence. Both myself and the Fiesta RS WRC have really taken a step forward in that respect, and we know the car is well-balanced and competitive on every surface. We left the test in France with some good ideas and having done a lot of tyre testing in mixed weather conditions,” said the Finn.

“For me, Germany is the most difficult asphalt rally of the year. The stages are very enjoyable, but tyre choice is always extremely tricky and the hinkelsteins are very unforgiving; if you go wide in the Baumholder section, you pay a heavy price. However, whilst before we went there thinking a podium would be great, now we know we’ve genuinely got a chance of fighting for victory.”

Solberg, co-driven by Chris Patterson, has even more knowledge of the event with nine starts to his name. The Norwegian was denied a potential podium in Germany in 2011 by a series of punctures.

“I like Rallye Deutschland a lot; it’s always a fantastic event, with a really good atmosphere and lots of fans, and it will be good to get back onto asphalt for the first time since Monte-Carlo. Obviously I still don’t have masses of experience with the Fiesta RS WRC on asphalt, but the general feeling is good so it will be interesting to see how we compare to our opposition in Germany,” said Solberg.

“With the vineyards and military area, Rallye Deutschland is not like other asphalt rallies. The biggest challenge is the changeable surface and grip levels, and the Baumholder with its hinkelsteins is particularly tricky – especially if it rains! The key will be to stay out of trouble and see what happens.”

Volkswagen with large line-up at WRC home round