Contemporary look for Ford's radical new Focus rally car -- Ford Rallye Sport today unveiled the most technically advanced and revolutionary rally car ever when it launched the Ford Focus RS WRC 03 at the team's Dovenby Hall base in Cumbria, ...

Contemporary look for Ford's radical new Focus rally car -- Ford Rallye Sport today unveiled the most technically advanced and revolutionary rally car ever when it launched the Ford Focus RS WRC 03 at the team's Dovenby Hall base in Cumbria, England. Innovative in its radical styling, the evolution version of the successful Focus RS, winner of 11 world rallies since its debut in 1999, will make its competition debut on the fourth round of the FIA World Rally Championship, the Rally New Zealand, on 10-13 April. 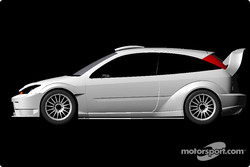 The new Ford Focus RS WRC 03.
Photo by Ford Motor Company.
The new Focus RS is radically different in both looks and mechanics to the car which competed on the opening three rounds of the 2003 championship. Technical director Christian Loriaux and his engineering team at M-Sport, the company which operates Ford's world rally programme, have added significant performance improvements to the most dependable and reliable car in the championship and a stunning new aerodynamic package gives the Focus RS an eye-catching contemporary look.

Highlights of the new Focus RS include:

The car is Loriaux's first design since joining the team at the start of 2002. Starting with a clean sheet of paper, initial design work began in mid-May 2002 and just seven months elapsed between then and the car's first brief test run six days before Christmas. Since then the car has undergone a comprehensive testing programme, most of it on gravel, in advance of its New Zealand debut.

Engineers at M-Sport and Ford's newly announced Team RS technical department in Cologne, Germany, worked closely on the project. Mainstream engineers at Ford undertook detailed analysis on Loriaux's roll cage design and the new rear suspension while the climatic wind tunnel in Cologne was used for advanced testing in the development of the cooling system and aerodynamics. The dynomometer there was also used by Ford and Cosworth Racing for dyno work on the new engine.

Martin Whitaker, Ford's European director of motorsport, and Malcolm Wilson, Ford Rallye Sport's team director and managing director of M-Sport, unveiled the Focus RS this morning at Dovenby Hall where the finishing touches are being put to the two entry cars for New Zealand. They will be driven by Markko M?rtin and co-driver Michael Park and Belgian team-mates Fran?ois Duval and St?phane Pr?vot. The team's third pairing of Mikko Hirvonen and Jarmo Lehtinen will continue to drive a 2002-specification Focus RS for the rest of the season.

"The new Focus RS World Rally Car is the first visible product of our decision to restructure the Ford Rallye Sport team," said Whitaker. "We made a decision to channel more of our resources into developing a rally car that is even more capable of winning. I firmly believe that the efforts of Malcolm Wilson, Christian Loriaux and his engineering team at M- Sport have given Ford Rallye Sport exactly that. Ford is at the forefront of rally technology with this car and I believe it takes the sport to a new, higher level.

"Rally car development and the regulations have changed to such an extent over the last few years that the days are gone when one single step forward could produce a huge leap in performance. Now it is all about gaining tenths of a second, but those tenths of a second are the difference between victory and coming second. I am genuinely excited by what the team has developed here and I think the car looks sensational. I am sure that there are more than a few tenths to come on the basis of this new design. I hope that the first day of the Rally New Zealand will be a proud one for not just everyone within the team, but also for all the employees within Ford Motor Company," added Whitaker. 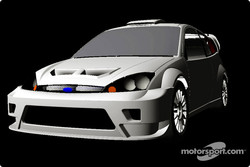 The new Ford Focus RS WRC 03.
Photo by Ford Motor Company.
Wilson described Loriaux's design as 'radical' and said some of the ideas were quite revolutionary. "Christian was given the brief to design a new Focus RS WRC with performance improvements. We have an incredible reliability record with the Focus, which has scored world championship points on each of the last 17 rallies, a feat unprecedented in the modern era of the sport. The next step is to raise the performance level. We're confident that will not be at the expense of reliability but we have to be realistic and expect a few problems in the early days of the new car," he said.

"How much was new and how much was carried over to the new Focus was initially Christian's decision. His ideas were exactly the reason I brought him to Ford Rallye Sport. He has made an in-depth review of the regulations, with some radical thinking, and more than 80 per cent of this car is totally new.

"We've made tremendous weight savings everywhere, reductions in which Cosworth Racing and Pi Research have played a major part. This has allowed us to ensure the weight is at the minimum level. We could have gone below that figure and so that has enabled us to add weight by strengthening parts in key areas to achieve a weight distribution which best benefits the balance and handling of the car.

"Having said that, we have actually increased the weight of the roll cage to improve driver safety. The Focus has a reputation for being a strong and safe car but we took the decision that if we could raise driver safety levels to an even greater level then that's something we should do," added Wilson.

The Ford Focus RS WRC 03 is due to undergo the necessary parts inspections by the FIA later this week and is due to be homologated as a World Rally Car on April 1.