Ford goes for gold in Greece as Latvala returns from injury

As the Olympic flame journeys from Greece to Britain for the London games, Ford World Rally Team heads in the opposite direction for one of the FIA World Rally Championship’s classic fixtures. The team will go for gold in the gruelling Acropolis Rally of Greece (24 -27 May), traditionally a happy hunting ground for Ford, which has won there 13 times since the series began in 1973.

The squad is boosted by the return of lead drivers Jari-Matt Latvala and Miikka Anttila. Latvala missed the previous round in Argentina with a broken left collarbone, but proved his fitness at a two-day test in Portugal last week. They will join Petter Solberg and Chris Patterson in Ford Fiesta RS World Rally Cars for the four-day dirt event, which is significantly longer than the 2011 rally.

Seven of those wins came in the last 11 encounters of the most demanding round of the championship for man and machine. Air temperatures in the gravel speed tests around the Gulf of Corinth, west of Athens, will be close to 30ºC, with cockpit temperatures well above that. Driver fitness is crucial and regular fluid intake is vital to stave off dehydration and ensure peak performance.

Mechanically, success in Greece demands a blend of strength, reliability and speed. The undulating gravel tracks have a fearsome reputation and cars must withstand severe punishment from rocks which litter the surface, as well as unyielding bedrock which forms the base of the roads. The Fiesta RS WRCs will carry additional underbody protection to guard against damage. 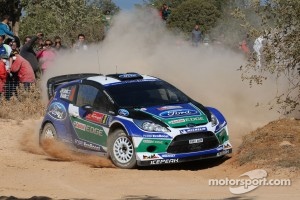 The heat also places high demands on engines and gearboxes. The relatively slow mountain speed tests, punctuated by hairpins, offer little cooling from the flow of air, while a combination of the heat and abrasive road surface requires strong durability from Michelin’s tyres.

Latvala has good experience of the Acropolis, dating back to 2003 when as an 18-year-old he finished 10th on his World Rally Car debut. He has seven starts to his name, with a best finish of third in 2009. The 27-year-old Finn covered 440km on his return to the wheel in testing and reported no discomfort from his collarbone injury.

“I was surprised how good it felt,” he said. “I wore padding under the HANS device to spread the pressure across my chest and shoulders and it worked perfectly. We planned a shorter first day, but with no problems I drove a full schedule on the second day on a rougher road, and I felt no pain in my collarbone or shoulder. My recovery schedule has been tight but I’m confident I won’t have to worry about the injury.

“We worked on the suspension and made a step forward, with the car feeling better in bedrock conditions. After so long out of the car I felt so happy and relieved that my skills were still there!

“It will be a hard rally and Saturday’s leg will be especially difficult. It’s longer than last year, with two passes over a new 21km stage, and it will be tough for the tyres in the heat. It will be important to manage the tyres well because tyre wear could be the most important aspect. You can drive at 95 per cent in those conditions, but to drive at 100 per cent all the time would be risky,” added Latvala. 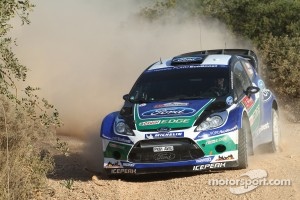 Solberg has a strong record in Greece. He scored his first career podium there in 2001, won in 2004 and has five podium finishes from 11 starts.

“It’s the roughest round of the season, but we’ll see if it proves to be the toughest,” he said. “There are many big rocks in Greece and that’s what makes the rally so tricky. I learned a lot about rough road driving when Kenya’s Safari Rally was part of the championship, and that’s useful for Greece. You have to be smart with your driving in this type of event.

“The rough roads and heat are also hard for the tyres. But Michelin’s tyres have been strong this year so I’m confident they’ll be good here also. I had some bad luck on the last two rounds, but still scored good championship points after driving at 110 per cent to climb back up the order. Hopefully I can have a clean run and keep the points coming,” added the 37-year-old Norwegian.

- Michelin’s Latitude Cross gravel tyres will be used by the Ford drivers and 48 of these will be available in hard compound. New-for-2012 regulations mean drivers will also have 10 soft compound tyres available if conditions are wet and muddy. However, only 48 units can be used in total during qualifying and the rally itself. Teams are not allowed to hand-carve additional cuts into the tyres and each car can carry two spare wheels.

- The rally marks the second round of the Ford-supported FIA WRC Academy. Eleven crews will drive Fiesta R2 rally cars over a shortened route before a Saturday lunchtime finish. Northern Ireland’s Alastair Fisher and Daniel Barritt lead the series after the opening round in Portugal.

- The cars of Latvala and Solberg will sport the Worldwide Ford Rally Fans logo in Greece and next month’s Rally New Zealand. In recognition of the support its members have pledged to Ford World Rally Team in recent months, the social media-founded organisation’s motif will appear on the rear of both cars, as well as on several other Fiestas.

A fourth day of competition and a new-look opening leg bringing the return of classic roads are the main changes for the 2012 edition. Loutraki, at the head of the Corinth Canal, remains the rally base with the main service park on the edge of the town. After Thursday’s start ceremony close to the spectacular Acropolis in central Athens, competitors tackle a single stage on the return route to Loutraki. Friday journeys north around the Gulf of Corinth to tackle stages near Itea that have not been used since 2009. It is the longest day, with almost 170km of competition and just two short service breaks in Itea. Saturday’s route journeys west across the Corinth Canal for stages in the Peloponnese peninsula and Sunday’s final leg is identical to last year and based east of Loutraki. Competitors tackle 22 stages covering 409.47km, 60km more than last year, in a route of 1661.39km.

Acropolis Rally: A classic event as the next test for the Volkswagen Team