The final all-asphalt round of the FIA World Rally Championship season in France next week allows Ford World Rally Team the opportunity to further improve its sealed-surface performance.

Twelve months after the squad first showed the Fiesta RS World Rally Car’s pace on its least-favoured surface at Rallye de France, the team returns eager to build on a series of podium results. 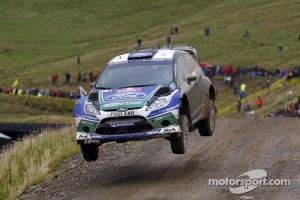 The Alsace-based event, round 11 of 13, contains almost 70km more action than in 2011 and nearly half the competitive distance is new.

Strasbourg, nestled on the German border between the Vosges mountains to the west and the Black Forest to the east, remains the rally hub for a third year.

The Vosges feature strongly in the route as the opening two legs take in speed tests there. The roads vary hugely, blending narrow and bumpy sections through forests with fast and wide parts where speeds top 200kph.

In contrast, vineyard tracks and three street venues in the regions towns and cities offer a totally different challenge.

As always on asphalt, accurate tyre selection will play a huge part. A combination of early autumn and the unpredictability of the weather in the mountains means rain is a distinct possibility.

Precise forecasting from Ford’s weather experts and data on conditions from the team’s route note crews, who drive the special stages before the competitors, will be vital in picking the correct tyre compound.

Latvala prepared for the rally with a day’s single-seater race car training from sports car and ex-Indy Car driver Didier André at the Le Mans Bugatti circuit in France on Wednesday.

André, who finished fourth in the 2010 Le Mans 24 Hours, worked with Latvala on braking and driving lines before the Finn journeyed to Alsace for a two-day test in a Fiesta RS WRC, which ends tomorrow.

“The weather was mixed which meant I had the advantage of driving on both dry weather slick tyres and wet rubber,” explained 27-year-old Latvala.

“I was happy about that because I had to adapt my usual driving line in the rain and that’s something I can use in rallying. When you come across a ‘black top’ shiny surface in stages, you must take a different line to avoid it.”

Latvala, who finished fourth in 2010 and 2011, starts the rally full of confidence after victory in Britain earlier this month and second in Germany in the previous round.

“Good results provide confidence and I had strong speed in France last season. I would like to challenge for the top placing. I’m a realist and know how hard that will be on asphalt, but that’s the target,” he said.

“The stages are a mix, quite similar in that respect to the rally in Germany, but the characteristics don’t change as much. There are long corners in the mountains while the French vineyards are wider than those across the border and follow more of a natural line.

They’re generally quite grippy and set-up is always a compromise for the different types of road,” added Latvala.

Solberg has a Rallye de France win to his name, having triumphed in 2003 when the event was based on the Mediterranean island of Corsica. His best result in Alsace is third in 2010.

“The roads are quite fast and the surface is good, so tyre wear won’t really be a problem,” said the 37-year-old Norwegian. “The only issue surrounding tyres is understanding the weather and ensuring we make the correct compound choice.

It’s not easy, but if conditions are changeable the right tyre options can make the difference between winning and losing here.

“Our speed on the previous asphalt round in Germany was strong. I expected the car to be fast, and it was. I hope we can maintain that progress and be faster still in France to give the fans something to cheer.

The crowds have been huge since the rally moved to Strasbourg. There’s a great atmosphere surrounding the event and that’s something that I certainly feel,” added Solberg.

Each driver has an allocation of 24 hard and 20 soft tyres, and can use a maximum of 25 during the rally. Teams are not allowed to hand-carve additional cuts into the tyres and each car can carry two spare wheels.

Daniel Oliveira / Carlos Magalhaes have been entered by Brazil World Rally Team while French duo Julien Maurin / Nicolas Klinger will drive in their home round.

The rally is again based at Strasbourg’s Zénith concert arena but has undergone big changes. The action covers four days, the competitive distance is almost 20 per cent longer and nearly 44 per cent of the stages are new, including two previously-unused tests.

A new street stage in Strasbourg, which finishes outside the European Parliament, starts the action on Thursday afternoon.

The opening two legs have been switched from 2011, so the first full day heads deep into the Vosges mountains for high altitude tests near Colmar, which hosts a short service midway through. It ends with a street test in Mulhouse.

The second leg offers a massive 192.80km of competition through vineyards and mountains closer to Strasbourg, including two passes of the daunting 43.45km Pays d’Ormont.

The short final day journeys north and includes two runs through the streets of Haguenau. Drivers tackle 22 tests covering 404.14km in a route of 1404.89km.