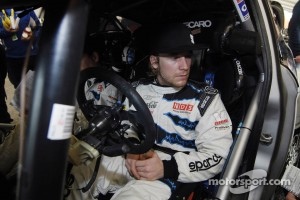 “I don’t know if I am more happy with second place or with making it to the end of the rally! It has been really hard for me to hold back over the last two days because we have slowed down a lot.

“We had a good fight with Evgeny [Novikov], but I felt I was in control most of the time. Today it was just about getting through and I am really happy to make it to the end with such a good result.

“We have had a great start to the season and hopefully it will continue. We are not expecting to fight for a podium in Argentina but we will be looking to make it into the top-five. Then when we return to more familiar events we can push some more.”

“The last two stages [SS21 and SS22] were really very difficult. There was water everywhere so we decided not to push and just to make it to the finish.

“It was a shame to lose out to Nassar [Al-Attiyah] on the last stage [SS22]. But we have secured sixth place which is very good result for us and I am very happy with this weekend.”

“This was a very difficult rally for us, but today felt great. Everything was much better than on the previous days, but unfortunately the rally is at an end now.

“Of course it is great to have scored a world championship point, but we could have been fighting for the top-five. I am just happy to have made it through considering all the problems we have had.”

“This was a very nice rally. It was not so good at the beginning but we were starting to get a good feeling in the car towards the end and we were building in confidence all the time.

“The next rally for us will be in Argentina where we know the stages a little better. I hope we can be a little more competitive there and push a bit more.”

“I am happy to have made it to the finish because I think we have had everything this rally. Fog, rain, dry conditions, everything! We have to work a little bit on our speed, but we didn’t make any serious mistakes or have any issues with the car. Second place really is fantastic for us!”