Sordo retains third after day of consolidation in Rally Argentina 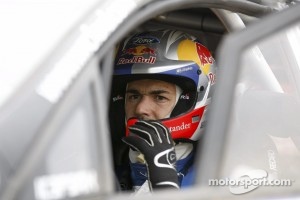 Team-mates Petter Solberg and Chris Patterson recovered to ninth after restarting under Rally 2 regulations following their retirement yesterday. They moved up from 11th overnight, hitting top gear in their Fiesta RS WRC this afternoon when they won all three speed tests.

After the attrition of yesterday’s opening leg, today was a much quieter affair. Drivers headed south from the rally base of Carlos Paz, 700km north-west of Buenos Aires, for two loops of gravel special stages in the Calamuchita Valley. The day ended with a second pass over the short test in Carlos Paz which kick-started the rally on Thursday. The seven stages covered 166.54km.

Dry but cool conditions this morning persuaded Sordo to opt for Michelin’s soft compound tyres. He later switched to a mix of soft and hard compound rubber, before choosing hard tyres for the entire afternoon loop.

Sordo, replacing the injured Jari-Matti Latvala in a one-off outing for the team, held a firm grip on third and took no risks this morning as he consolidated the podium place. The afternoon followed the same pattern, as the 28-year-old retained his focus on securing a strong points finish.

He was second fastest in the opening stage of the afternoon and the final test to end the day 1min 19.2sec ahead of his closest rival.

“I made no mistakes but I wasn’t so happy with my times this morning,” admitted Sordo. “I didn’t have full confidence in my pace notes, but they were better in the second pass. I had a front left puncture in the middle stage this afternoon and I only had one spare wheel. I couldn’t afford another puncture so I was more careful in the last stage.

“The roads were fun with jumps, fast corners and water splashes. I could have driven flat out, but even then it would be unlikely that I would close the gap to the drivers ahead. My goal is to keep this position. It would be better to finish third rather than take risks and go off the road,” added Sordo. 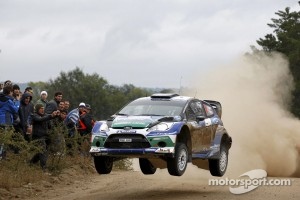 Solberg’s sole target was to climb as far into the points as possible. The 37-year-old Norwegian adopted a fast, but safe, pace and was never outside the top three times. Two seconds and a third this morning enabled him to close on those ahead and his hat-trick of victories this afternoon promoted Solberg up the order.

“This afternoon was perfect,” said Solberg. “The stages were fantastic and the Fiesta was so fast. My focus is to score as many points as I can so I didn’t take any risks. I would like to have more kilometres to chase the people ahead, but I only have one day remaining so I will do my best.

“I wasn’t as fast this morning but my start position meant I had to sweep the road and that was a key factor. I still set good times, but I hoped for more. My only mistake came in the second stage when I spun at low speed. The notes for the last stage were made in fog during the recce, and they weren’t perfect in today’s brighter conditions,” added Solberg.

Ford World Rally Team director Malcolm Wilson said he could not have expected more from Sordo. “He’s done a great job for the team considering the limited time he’s spent in the car. He can’t catch the drivers ahead, so he’s aiming for a solid finish. He was frustrated with his pace but they were difficult stages. Petter fought back well. He had a disadvantage with his road position this morning, but the stages were cleaner for the second pass and he put in a strong performance,” said Wilson.

The final day includes some of the most iconic roads of the season and the longest special stage of the championship. After leaving Carlos Paz at 06.52, drivers head into the Traslasierra mountains via the monster 65.74km test from Matadero to Ambul, an amalgamation of four stages last used in 1996. Drivers then head into the classic Giulio Cesare and El Condor tests, before the final Power Stage across the picturesque hanging bridges near Copina. They face six stages covering 132.19km before the finish in Carlos Paz at 16.44.