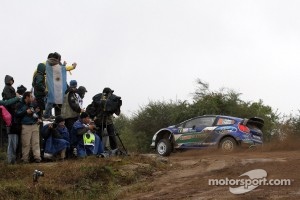 The record-breaking run began in the opening round of the 2002 series in Monte Carlo. At least one of the team’s nominated drivers has finished in a points-scoring position in every round since.

Ford and rally partner M-Sport celebrated the achievement at the finish ceremony of this fifth round of the 2012 championship in Carlos Paz this afternoon. Ford Racing senior manager Gerard Quinn and Ford World Rally Team director Malcolm Wilson joined Solberg and Patterson in front of their Fiesta RS World Rally Car as they took the applause of the huge crowds.

“This record is the product of a remarkable blend of speed and reliability. We’ve shown over a decade of WRC rallies that we can score consistently. Celebrating 150 consecutive points finishes here today gives us the confidence to go on to mount a challenge for the manufacturers’ title during the remaining eight rounds of the season,” said Quinn.

However, there was also disappointment for the team when Dani Sordo and Carlos del Barrio retired their Fiesta RS WRC from third place with a suspected alternator problem just 4km from the end of the 502km rally. Sordo, replacing the injured Jari-Matti Latvala in a one-off appearance, delivered a superb performance to lie inside the top three from the start after only a single day’s testing.

Rally Argentina was the longest WRC round for almost a decade. Heavy rain before the start made the gravel roads in Cordoba province, 700km north-west of Buenos Aires, extremely slippery. With the rules allowing only a limited allocation of Michelin’s wet weather soft compound tyres, drivers were forced to complete much of the event using compromise hard compound rubber or worn soft tyres.

Solberg took the lead on Thursday night’s opening speed test and extended his advantage to more than 20 seconds on Friday morning. However, the 37-year-old Norwegian suffered heartbreak when his car’s sump guard hit some bedrock and bent the left steering arm. When the arm later broke, his car was pitched off the road into a rock and retirement.

He restarted with a 15 minute time penalty in 11th place. But a determined drive propelled him to sixth, winning nine of the last 10 special stages and claiming all six in today’s final leg. He also won the final Power Stage, claiming three bonus points to retain second in the drivers’ championship.

“After what happened on Friday, I have to be happy with sixth,” said Solberg. “To win all six tests and the Power Stage today was perfect. I’m proud of what we achieved yesterday and today. Friday was the toughest day I’ve had for a long time, but the result shows why you should never give up, no matter what the situation.

“The stages were enjoyable and the car felt good, so I was able to push hard today. The disappointing thing is that I could have won. This could have been my first victory for a long time, but we’ll continue to work hard and I know it will come soon,” he added.

Sordo’s fine performance ended just after the start of the final 4.15km Copina test when a suspected alternator problem brought his car to a halt.

“At the finish of the penultimate stage there were alarms flashing in the car indicating a battery problem,” said Sordo. “We started the final stage but less than 1km into the test the car stopped. It’s a disappointing way to finish, but the weekend was a good experience. 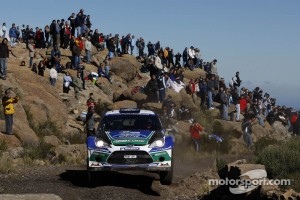 “I was happy with my performance. Finishing was our goal so not to do so was sad, but it was good working with the team. I’d like to thank Ford and M-Sport for giving me the opportunity to drive the Fiesta RS WRC. I loved the car and really enjoyed my four days of Rally Argentina,” he added.

Team director Wilson said: “Petter produced a great recovery which culminated in him winning the Power Stage. After everything that happened, to leave Argentina with Petter still second in the championship is good. Dani did a perfect job and it was desperately sad for him to retire so close to the finish. The fact that the voltage in the car was so low indicates it was an alternator problem.”

Mads Østberg and Jonas Andersson climbed to third in the Adapta World Rally Team car after Sordo’s retirement, while Czech duo Martin Prokop and Zdenĕk Hrůza moved up to a career-best fourth. After first day retirements, M-Sport Ford World Rally Team’s Evgeny Novikov and Denis Giraudet and team-mates Ott Tänak and Kuldar Sikk restarted under Rally 2 rules. They focused on learning the roads and perfecting their pace notes and were rewarded with eighth and 10th respectively. Brazil World Rally Team’s Daniel Oliveira and Carlos Maghaläes did not restart today after damage resulting from a broken driveshaft yesterday.

Next round
Round six takes competitors back to Europe for the Acropolis Rally of Greece, which is based in Loutraki on 24 - 27 May.