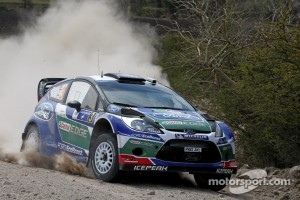 After losing the lead when he dropped more than 90sec with damaged suspension, Latvala won three speed tests in his Fiesta RS World Rally Car to charge back up the order from eighth. Solberg, rally leader after last night’s short street stage, lost a similar amount of time following a puncture in each of today’s opening two stages to slip to 14th, but the Norwegian also stormed back up the leaderboard.

This third round of the FIA World Rally Championship began in spectacular fashion last night when tens of thousands of fans packed the picture postcard town of Guanajuato for the start ceremony. Solberg, who was quickest in qualifying earlier in the day, then sped to fastest time through the cobbled tunnels which once formed shafts in the city’s gold and silver mines.

The rally began in earnest today with two loops of dry and dusty gravel stages in the rolling mountains near the city. The day ended with two tests at the race circuit on the edge of the event base in León, 400km north-west of Mexico City. One stage was cancelled for safety reasons so drivers tackled 11 tests, covering 123.52km.

The route climbed to a breathtaking 2737m above sea level and the altitude deprived drivers of 20 per cent of their normal power levels. Temperatures reached 30ºC, ensuring hot work for the crew and the engine and transmission in their cars.

Latvala took the lead when he won this morning’s second stage. The 26-year-old Finn held a slender 2.2sec advantage before he hit a rock in the final test of the loop and broke his car’s front left suspension arm.

“It happened about 12km into the stage at a sixth gear, blind left curve over a crest,” he said. “In my pace notes I had a rock marked on the inside so I couldn’t cut. I saw another rock next to it that wasn’t there during the recce, and because I was in sixth gear there was no chance to avoid it. I tried to steer the car wider, but it was slippery off line so I had to turn in and hit the rock.”

With his Fiesta RS WRC restored to full health in service, Latvala set about closing the gap on those ahead. He won three consecutive stages, eating into leader Sébastien Loeb’s advantage by more than 12sec, and ended the leg 1min 27.9sec behind the Frenchman.

“The morning was disappointing after a great start, but I fought back well this afternoon,” added Latvala. “We were leading a rally in which we’ve struggled in the past, so the car has the speed to be competitive and I hope I can put pressure on our rivals ahead tomorrow. If I can get back into the top three I will be happy.”

Solberg’s overnight lead was short-lived. The 37-year-old Norwegian dropped 50sec after puncturing the left rear tyre 4km after the start of the opening stage, and another 30sec with a right rear puncture in the next test. He climbed from 13th to seventh over the next two tests before service in León.

“The first puncture happened after a small touch against a bank in a sixth gear section,” said Solberg. “I continued attacking but I spun, and after that I drove steadily to the finish. The next one was a bigger impact against a rock in a second gear left bend when I was pushing to regain time. I drove carefully over the last two stages as I had no more spares and had to ensure I made it to service.”

A string of top three times this afternoon maintained his upward momentum and he ended the day 7.5sec behind his team-mate.

“Perhaps I pushed a little too much this morning, but sometimes once you make a mistake you try to recover the time lost and then make more errors. My aim is to get onto the podium and although we probably need those ahead to make a mistake to achieve that, I will continue to attack and see if we can put pressure on them,” added Solberg.

Despite the disappointments, Ford World Rally Team director Malcolm Wilson was encouraged by the day. “It’s the most competitive Ford has been here in recent years. We scored more stage wins than anyone else in the gravel mountain stages and that’s a great confidence boost. Both cars were damaged this morning but a huge amount of work was put into repairing them and both drivers recovered well,” he said.

The second leg is the toughest, with drivers facing a massive 183.30km of action during more than 13 hours behind the wheel. It is based closer to León and includes two passes over the daunting 41.88km Otates test. Competitors restart at 06.00 and tackle two identical loops of two stages, before a final section which includes another test at León’s race circuit. They return to the city for the overnight halt at 19.23 after seven more stages.