Jari-Matti Latvala and Miikka Anttila matched their career-best performance on asphalt when they finished second in Rallye de France today. The Ford World Rally Team duo finished just 15.5sec from victory in a Ford Fiesta RS World Rally Car, to equal the second place they secured in Germany in August. 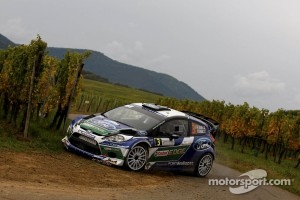 Latvala won six speed tests and the 27-year-old Finn described the result as ‘my best driving performance on asphalt’. Latvala has won once and twice finished second in the last three rounds of the FIA World Rally Championship to climb to third in the drivers’ standings after a tough opening to the 2012 campaign.

Team-mates Petter Solberg and Chris Patterson finished 27th in a similar Fiesta RS WRC. After retiring yesterday following a spectacular accident which felled a telegraph pole and provided huge global coverage on TV and video sharing websites, they restarted today to ease through the final leg.

This 11th round of the 13-rally championship was based in Strasbourg, in the Alsace region of eastern France. Drivers tackled four days of competition covering 404.14km, most of it on slippery roads in the Vosges mountains and muddy lanes in the region’s vineyards. Street tests in Strasbourg, Mulhouse and Haguenau provided a contrast and spectacular entertainment for the huge crowds.

Latvala won three special stages during Friday’s first full day of action to pile the pressure on leader and Alsace hero Sébastien Loeb. The Ford driver lost 10sec early in the second leg when he briefly slid into a ditch but added another three stage wins. With no realistic chance of victory and no pressure from behind, he drove cautiously through today’s rain-soaked final leg to secure second.

“My target was to improve on my performance in Germany and I achieved that,” said Latvala. “I made one small mistake yesterday, and when you’re trying to beat a nine-time world champion on his favourite surface over his home roads, that’s one error too many. But I finished only 15sec behind Loeb so I feel there is just one more step to take. I really want to beat him on asphalt!

“This result has given me great hunger for the final two rallies in Italy and Spain. They are both great events, one on gravel and one on both gravel and asphalt. I feel very motivated to finish the season on a high note,” he added.

After initially struggling to find a rhythm, Solberg bounced back to end the first day in fourth. However, he went off the road in the opening kilometres of the second leg, ploughing through dense vines before coming to an abrupt halt against a telegraph pole. Nobody was injured in the incident but the impact damaged the front right of Solberg’s Fiesta RS WRC too severely to continue.

“I enjoyed a good first leg but then the accident happened yesterday,” said Solberg. “I had nothing to gain today so I drove for the fans as much as anything. Conditions were difficult and I knew it would be hard to score bonus points in the Power Stage because I started down the order. There was so much mud on the road.

Ford World Rally Team director Malcolm Wilson agreed that this was Latvala’s best asphalt performance. “He kept the pressure on Loeb until the end and that is something he hasn’t been able to do previously. The pace of the Fiesta RS WRC was there for all to see – it was a very strong display from both driver and car,” he said.

Ford Racing senior manager Gerard Quinn said: “In my opinion this was Jari-Matti’s best performance on asphalt. His pace and commitment were fantastic and it was great to see him on the podium. Petter had a difficult rally but his accident yesterday provided the WRC with the best global TV coverage of the season! I would also like to congratulate Sébastien Loeb and Daniel Elena on retaining their title.”

Elfyn Evans / Phil Pugh won the penultimate round of the Ford Racing-supported FIA WRC Academy. Evans’ victory at the wheel of a Fiesta R2 was his fourth consecutive triumph and guaranteed the Welshman the Academy title* with one round remaining.

The penultimate round of the series in Italy marks the final all-gravel event of the championship. Rally Italia Sardegna is based in Olbia, on the Mediterranean island of Sardinia, on 18 - 21 October.