Following on the news that the Red Bull Media House and the Sportsman Media Group would oversee the Federation Internationale de L’Automobile (FIA) World Rally Championship as the organizers and promoters in 2013 and beyond, MINI announced that they would withdraw their works team at the end of the 2012 season.

Today, Ford of Europe announced that they will withdraw as a “title sponsor” at the end of the current season.

Ford is not completly withdrawing from being competitive in the WRC. They did what they needed for the past years to keep their brand name alive, and to challenge for the world championship titles. However the economy has not improved over the years since the initial global financial crisis. Now with the support of the top energy drink, Red Bull, it appears that both Ford and MINI are looking at their future in the marketing and sales arena. 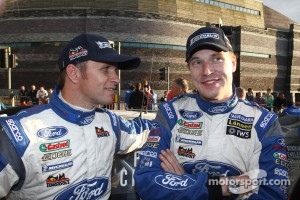 “Ford has a long and proud history in the WRC and this was not an easy decision,” said Roelant de Waard, vice president, Marketing, Sales and Service, Ford of Europe. “At this time, however we determined that it was better for the company and the Ford brand to reduce our commitment to the WRC and deploy our resources in other areas.”

Ford’s partner since 1997, M-Sport, will remain in the rally world. The UK-based company has confirmed that they will continue to contest for stage and rally wins with the Ford Fiestas. Managing director of M-Sport, Malcolm Wilson commented, "My intention is that we will continue to push to secure stage wins and overall results on the forthcoming events for Ford and to push forward with the development work that was started in March this year to improve and refine the Fiesta WRC even further, ready for the 2013 season.”

De Waard stated that Ford and M-Sport’s Wilson are in discussions that will keep the Ford brand alive as a top competitor in WRC. They will continue to provide engineering support; including the new Fiesta R5. “We have great respect for M-Sport and Malcolm Wilson, who have run the Ford WRC team since 1997, and there is no organization with more expertise and commitment to winning,” de Waard said. “Working together, we have reached a point where the Ford Fiesta has become the car of choice in rallying, and we want to see this continue in the future.”

Wilson said, “I would like to thank Ford of Europe for their enthusiastic support and the faith shown in the team over the past 16 seasons. We understand that tough decisions have had to be made to safeguard Ford jobs; we accept the commercial reality of the situation and look forward to continuing our strong technical partnership into the future.

"Confirmation of our key championship programmes for 2013 is our first priority and a challenge that the team here is very much looking forward to. After that we can review all options and determine the right direction for the future,” he added.