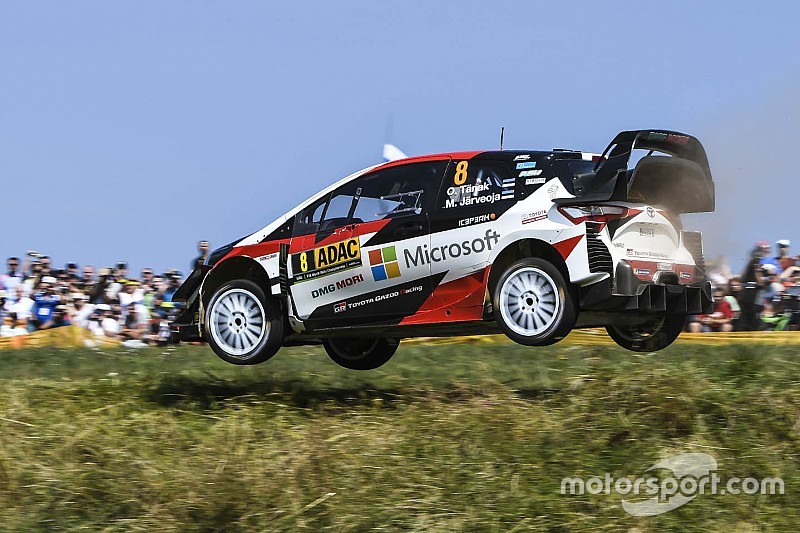 Toyota driver Ott Tanak takes a 44-second lead over the battling Dani Sordo and Jari-Matti Latvala into Rally Germany's final day, while Sebastien Ogier is flying on a comeback drive.

World Rally champion Ogier was Tanak's nearest rival until he had to stop to change a damaged wheel on the afternoon running of the Panzerplatte stage.

That cost him around 1m40s and dropped him from second to ninth.

He then gained another place when sixth-placed Craig Breen ran wide and broke his Citroen's rear suspension on the day's closer Romerstrasse.

Ogier couldn't quite do enough to overcome Andreas Mikkelsen for sixth on that stage, but will start Sunday just half a second behind the struggling Hyundai driver.

While Tanak was able to back off once Ogier had been delayed, the battle for second has got ever more tense.

Sordo was quickest on both the short and long versions of Panzerplatte and reached second despite starting the morning only sixth.

Latvala came back at him when the route left the military ranges for the next two stages, and closed to within 0.8s of the Hyundai by the end of the day.

Championship leader Thierry Neuville was able to switch back to his preferred differential when Hyundai deduced that the gearbox removed as a precaution following a Friday oil leak was not damaged.

But he couldn't keep pace with Sordo and Latvala, suggesting first that his set-up was too stiff and then that, with Ogier delayed, the dilemma of whether to settle for the points he already had or push to maximise his gain by charging for second was playing on his mind.

Breen managed to reach the end of Romerstrasse after his incident, and should be able to nurse his car to service and continue in 10th place behind Citroen teammate Mads Ostberg.

Prior to going off, Breen had been inching towards Esapekka Lappi for fifth. Pushing to keep the Citroen at bay, Lappi was second-quickest on the day's last two stages and is now just 6.3s behind Neuville for fourth.