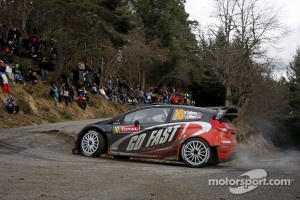 Following a freak accident during training last week and a broken left ankle for Matthew Wilson, Henning Solberg and Ilka Minor will lead the Go Fast Energy World Rally Team as the World Rally Championship heads to Sweden for the second round of the series.

Spanning two countries over more than 350 competitive kilometres, the 60th Rally Sweden will see the Go Fast team endure subzero temperatures testing both man and machine alike. Spectacular action is guaranteed on this the only true snow rally on the 2012 Calendar, and crowd-favourite Solberg will be out to impress on what is effectively the Norwegian’s home event.

It was during one of Wilson’s regular training sessions - fell running around the English Lake District - that the British driver took an awkward fall putting him and co-driver Scott Martin out of Rally Sweden. Having been rushed to hospital, doctors later confirmed that the 25 year-old had broken his left ankle.

Wilson had been due to complete 100km of testing in his Ford Fiesta RS WRC early this week and was looking forward to getting his 2012 season off to a competitive start with a good result on the more familiar Scandinavian stages. Unfortunately, the injury will see the Cumbrian out of action for the near future and the entire team wish him a speedy recovery.

Last month’s Rallye Monte-Carlo saw an eventful opener to the season for Solberg. Blighted by cruel bad luck, and with no pre-season testing in the lead-up to the event, Solberg battled on to set competitive times throughout. Proving he has some real pace in the car, the charismatic Norwegian will be looking to translate the good form he demonstrated last month into a strong haul of points on the snow-covered Swedish stages.

In preparation for the second round of the season, Solberg contested Rally Finnskog alongside the likes of Mikko Hirvonen, Mads Østberg and Eyvind Brynildsen last weekend. Getting into the rhythm of winter rallying, Solberg impressed to finish second overall in a much less powerful Mitsubishi Evo 6. Despite losing valuable time with a spin on SS3, the Norwegian got the better of his compatriots to finish just 30 seconds adrift of eventual winner Hirvonen in a Citroën DS3 WRC.

The Go Fast driver will be looking to replicate last weekend’s speed with a strong haul of points as he returns to his Ford Fiesta RS WRC this week.

“We’re going to ‘Go Fast.’ Flat out. This is one of my favourite events and we’ll be pushing for a good result.

“I’m really looking forward to the rally. This is like my home event and the fans are always absolutely amazing! There is always such a great atmosphere in the forests. The [Scandinavian] fans are some of the best in the world!

“I’ve got a really good feeling on snow after [Rally] Finnskog. We got the feeling just right straight away and everything was running well. Hopefully it will be the same next week [at Rally Sweden] and we can push for a really good result.”

“I’ve broken and dislocated my left ankle so, unfortunately, that means no Rally Sweden for me and Scott [Martin].

"I was really looking forward to Sweden. We were a lot more prepared for this rally [than we had been for Rallye Monte-Carlo] and we would have been looking for a good result. I’m absolutely gutted.”