Having led the rally since stage three, Mikko Hirvonen and Jarmo Lehtinen had no problems in finishing the job on Rally Italia’s short final leg on Sunday.

After finishing as runners-up two times running in Sardinia and collecting eight podium finishes this season, the Finnish crew landed their first win with the Citroën Total World Rally Team. 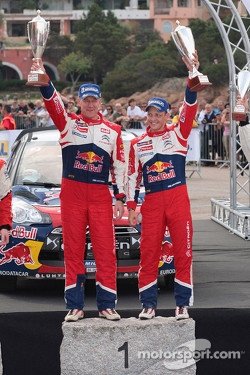 This result means that Mikko and Jarmo are now guaranteed to finish as runners-up in the 2012 World Rally Championship*.

Made up of two runs in the short Gallura stage (8.24km), the final day of Rally Italia provided little in the way of sporting spectacle, especially as there were clear gaps between the first four in the overall standings.

Even though bonus points were available on the second run as it served as the rally’s Power Stage, the competitors still set out from Olbia this morning with their minds more focussed on defence than attack.

With a minute and a half lead on the second-placed crew, Mikko Hirvonen and Jarmo Lehtinen just needed to ‘cruise home’.

Despite conceding several seconds on the final two stages, the Finns made it to the final time control without incident.

The Citroën Total World Rally Team, who won their ninth rally from the twelve held so far this year, were thrilled with the outcome.

“This first win for Mikko and Jarmo with Citroën was one of our goals for the end of the season,” confirmed Yves Matton, Citroën Racing Team Principal.

“We felt that we owed them something after the Rally de Portugal and so it’s immensely pleasing to see them win here. This result wasn’t served up for them on a plate.

They had to adopt a very high level of performance from the very start and the other leading crews made mistakes when fighting with them for the lead.

The last few days have been long and testing; we also had to contend with one of the season’s most difficult courses.

After winning the Drivers’ and Manufacturers’ titles at the Rallye de France, we have now added the final feather to our cap with the World Championship runner-up spot for Mikko.

There’s only one more step for him to take in his career and we’ll be trying very hard to help him achieve that in 2013!”

Having already finished as World Championship runners-up in 2008, 2009 and 2011, Mikko Hirvonen and Jarmo Lehtinen repeated the feat in claiming their fifteenth WRC win, the last of which dates back to Australia 2011.

”I’m really very happy with this result for my first season with Citroën. I have finished on the podium many times since February, but I was beginning to grow irritated at not finishing on the top step!

After a very short – too short – scrap with Sébastien, in the end, it was actually through being patient that I won the rally. I am pleased to do it here for the team, who have done everything they could to help me make progress.

I’ve done a lot of work with my engineer in the last few weeks and I feel that I am continuing to make steady progress. I can’t wait to be in Spain to finish the season in style!”