After two days on tarmac, Rally de España concluded on the gravel roads of southern Catalonia. Unfortunately, Dani Sordo and Carlos del Barrio were unable to complete their home event, as they were forced to retire when fighting for one of the top-three places. Meanwhile, Mikko Hirvonen and Jarmo Lehtinen grabbed the third and final podium spot.

Held on the super fast tarmac roads around Reus, Saturday’s long day ended with an intense period of mechanical work in the service park. The Citroën Racing team spent the 75 minutes available to convert the DS3 WRCs to their ‘gravel’ configuration, given that Sunday’s final leg would be held on the dusty roads up in the neighbouring hills, with three stages each of which would be run twice.

The day’s action began with the Gandesa test. Rather unexpectedly, hanging dust turned out to be main topic of discussion at the end of the stage, as opposed to problems related to sweeping the racing line. As the conditions remained largely the same on all of the stages, the issue kept cropping up throughout the morning. By midday, Dani Sordo still held onto second place overall, despite having conceded a few seconds to Jari-Matti Latvala. 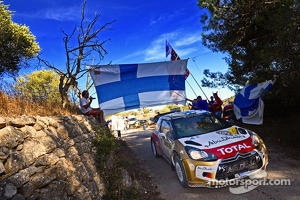 “I’m pleased to have more or less matched my main rival. My fears turned out to be unfounded, as I felt pretty good in the car right from the word go,” commented the Spaniard. “Ogier has fought back and is now just a few seconds behind. I’m going to try and hold him off but his starting position is still better than mine.”

Also very much on the pace of the leading drivers, Mikko Hirvonen had moved up into fourth overall during the first loop: “I set some good times, but it could have been much better. At certain points, there was so much dust that I just had to stop. I had no choice, really – we couldn‘t even see the road in front of the car! I am going to try and drive quickly this afternoon; I still have a slim chance of grabbing a place on the podium…”

The Finn certainly wasn’t thinking, however, that he would move up in the standings thanks to the retirement of Dani Sordo. After clipping a rock on the penultimate stage, the no.3 DS3 WRC driver was forced to park his car at the side of the road. Mikko Hirvonen therefore took over from him in third place, a position he held onto until the end: “First of all, I’m really sorry for Dani and Carlos, who had had a great race, both on tarmac and on gravel. I’m pretty happy with my weekend, as we managed to stay among the leaders during the tarmac stages. It’s good to be back on the podium. I’ll now be trying to finish off the season in style at Wales Rally GB.”

After making noticeable progress on tarmac, Khalid Al-Qassimi had to adapt to the slippery conditions on the final leg. The Abu Dhabi Citroën Total World Rally Team driver finished 11th, just outside the points: “Like everyone else, I was hampered by the dust in the first few stages. But most of all, I struggled to make the most of the changes we had made to the set-up. We didn’t do any testing before this rally, so I spent more time getting to grips with how the car worked on the gravel. I’m nonetheless pleased to have made it to the end of the rally without making any mistakes.”

“This rally served up a plethora of difficulties, and I’d like to highlight the high quality work done by all of the members of our team,” concluded Yves Matton, Citroën Racing Team Principal. “As regards performance, reliability and strategy, we have had a very good race. Dani didn’t make it to the finish, but he had to push as hard as possible to fight off our rivals, and you can’t do that without taking some risks. I would like to take this opportunity to congratulate Volkswagen, who have succeeded Citroën as Manufacturers’ World Champions. They have had a great season and deserved to win the title.”