Hirvonen keeps up the pressure

After pushing hard every inch of the way, Mikko Hirvonen and Jarmo Lehtinen held on to second position in Rally Sweden. The Citroën Total World Rally Team crew now trail Jari-Matti Latvala by 23s ahead of the final day of racing. Sébastien Loeb and Daniel Elena achieved their target for the day, clinching sixth place.

Day two was disputed on roads around Hagfors, with two runs on four classic stages of the rally. Lying second, 16.8s behind Latvala as the drivers started SS11, Mikko Hirvonen’s aim was clear for all to see: the Finn wanted to fight for the win! By the Vargasen control point, he had nonetheless lost 2.2s to the leader. Latvala picked up a further 9/10ths on SS12, just before Mikko hit back on Fredriksberg. With the fastest stage time, the Citroën Total World Rally Team driver confirmed that he would be pushing his fellow countryman all the way.

I can't push any harder, we’re veryclose to the limit.

As the drivers arrived for service at the half-way stage of the day, the gap stood at 18.6s. “I'm trying everything I can, but we’re very evenly matched and so it’s not enough,” acknowledged Mikko. “I can't push any harder, we’re very close to the limit. I have to keep doing the same thing this afternoon while remembering to look after my tyres, so I don’t have the same problems as yesterday. There is a lot of gravel on the stages, so it will be difficult to get the balance right between pushing hard and managing the studs.”

The afternoon’s racing unfolded in more or less the same manner as in the morning: although Hirvonen went quicker on Fredriksberg, he lost a few seconds on the other stages. The gap widened to 23s after SS18. “Obviously, I’m a bit disappointed that I haven’t managed to reduce the gap, because I would really like to win this rally for the third time running“ concluded Mikko. “However, I am particularly pleased with the feeling I am getting in the car, and that's very encouraging for the next few rallies. Under normal racing conditions, for sure, I won't be able to win the race. But you never know, something unexpected might happen. I‘ll keep putting Jari-Matti under pressure tomorrow.” 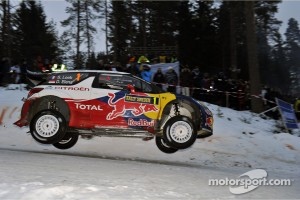 Sébastien Loeb and Daniel Elena could only look on as the two Finnish rivals fought it out for victory. Seventh overall, over two minutes off the pace, the eight-time World Champions were nonetheless determined to move up a place. They managed to do just that, after a long and difficult day: "I won’t keep fond memories of today’s stages, but we achieved what we set out to achieve despite spinning and picking up a puncture… The gap to fifth means that there is not much more I can hope to do at this rally. Bring on Rally Mexico!”

“Although Mikko kept pushing today, Jari-Matti managed to extend slightly the lead he had built on one stage yesterday afternoon. Let’s be realistic: under normal racing conditions, Citroën won’t win the rally,” commented Yves Matton, Citroën Racing Team Principal. “Mikko is aware of the importance of his second place. Having said that, there are still six stages to go and we must be ready to seize the slightest opportunity. I also think it is worth noting that all five DS3 WRCs are still in the rally and haven’t needed to rely on the Rally 2 rules. Those of our drivers who are relatively inexperienced on ice have driven intelligently and added to their experience.”