Hirvonen on course for podium finish after leg 2 in Portugal

Dani Sordo and Carlos del Barrio went off but will return for the final leg.

After a gruelling day’s racing for both men and machines, the second leg of Rally de Portugal saw the gaps widen in the standings. Promoted to third overall after Dani Sordo and Carlos del Barrio went off, Mikko Hirvonen and Jarmo Lehtinen will be looking to maintain their position on the final leg. 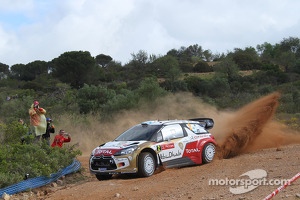 The day’s schedule involved two runs on a loop consisting of three long stages: Santana da Serra (31.12km), Vascão (25.37km) and Loulé (22.78km). Together, they provided the crews with close to 80km of hilly roads to be negotiated, whilst taking care to manage the quota of tyres, which was 40% down on last year.

Second overall, trailing the leader by less than five seconds as the crews left the service park, Dani Sordo immediately went on the attack to try and grab the lead. At the half-way point of the day’s first stage, it seemed that the Spaniard’s gamble was going to pay off. But his hopes of winning the rally evaporated when he hit a tree… “I had done a lot work looking at videos from recce and I had the feeling that I knew the corner well where the incident happened. My mistake was not listening carefully enough to the pace note. I carried a little bit too much speed into the corner and we hit the tree with the right-hand rear wheel, which broke right off. Everything was going perfectly up to that point. I felt fantastic in the car, in fact I don’t think I have ever felt so good on gravel… I hope I can reproduce that feeling in the next few rallies.”

Once the car had made it back to the service park, the Citroën Total Abu Dhabi World Rally Team’s mechanics got to work on the no.3 DS3 WRC, and carried out the necessary repairs so that Dani and Carlos can return to action tomorrow.

The hopes of the team then rested solely on the shoulders of Mikko Hirvonen. The Finn set a series of third-fastest times during the morning, reaching the midday service in the same position: “I feel a lot better than yesterday. In the technical, narrow sections, my pace is very good. It’s in the fast sections that I am losing time. I’m going to keep pushing to try and maintain the pressure on the front two.”

The second loop went very much the same way as the first, with Mikko holding firmly onto third position: “I really tried, and kept pushing all the way. Maybe I was a little bit too aggressive in some places. But even when I felt that everything was perfect, I was still losing a little bit of time to my rivals. I’ll have to aim for this position whilst making sure I look after my tyres.”

Although frustrated by a lack of confidence in the handling of his car this morning, especially caused by being one of the first cars out on the road, Khalid Al Qassimi was in better spirits this afternoon. The Abu Dhabi Citroën Total WRT driver gained several places to climb to ninth overall: “We changed the set-up and I also changed my driving style. I’m pleased with the progress we’ve made, but it’s still not enough. You have to take into consideration that this is all still relatively new for me, so I need more time to learn.”