Home advantage for the DS3 WRCs! 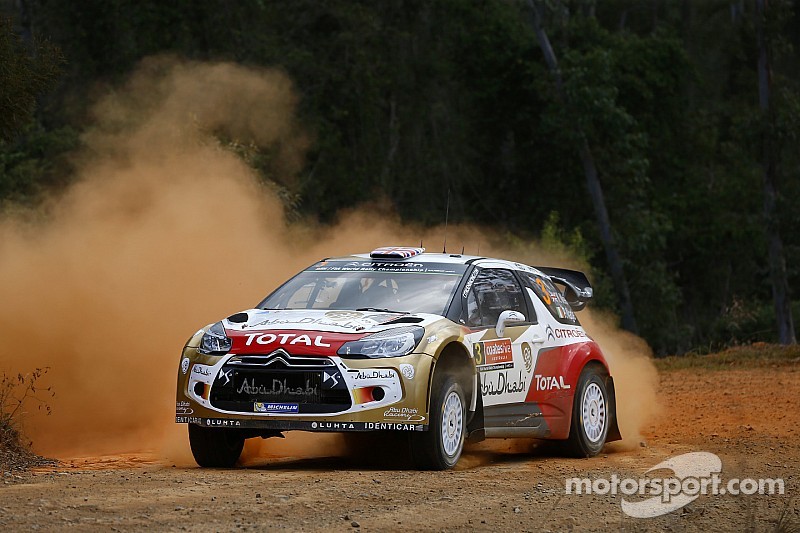 Included in the World Rally Championship calendar since its inception, the Rallye de France was held in Corsica for many years. Citroën drivers have recorded some of the Brand’s greatest sporting achievements on the ‘Isle of Beauty’.

In 1999, Philippe Bugalski/Jean-Paul Chiaroni and Jesus Puras/Marc Marti beat the WRC’s big guns to score an incredible one-two finish in their two-wheel drive Xsara Kit Cars. Two years later, on only the fourth outing of the Xsara WRC in a World championship rally, Jesus Puras and Marc Marti secured another significant win on the roads of Corsica.

Citroën Racing returned to winning ways in 2005, beginning a series of four consecutive victories with Sébastien Loeb and Daniel Elena in the Xsara WRC and the C4 WRC. The 2005 event also went down in history as being the only WRC round at which the winning crew set the fastest time on all of the stages!

A unique event for Citroën Racing

Although the love story began in Corsica, it became even more passionate when the event moved to Alsace. Since 2010, a very special relationship has been forged between Citroën Racing and the Rallye de France-Alsace. The success achieved and titles celebrated between Haguenau and Strasbourg remain very present in the minds of everyone in the team.

“It an especially important point of the season for the Citroën Total Abu Dhabi World Rally Team, which goes beyond the purely sporting side of things,” emphasized Yves Matton, Citroën Racing Director. “Citroën is a partner for the entire event. The huge crowds and enthusiasm for the rally makes it one of the real highlights of our season, like Monte-Carlo or Finland.”

“It’s also potentially one of the strongest rallies for our team,” he continued. “Citroën’s experience here, with three consecutive wins, and the competitiveness of our DS3 WRCs provide us with the means of going after good results in Alsace.”

Despite being located just 200 kilometres from the Rallye Deutschland stages, the character of the French round is markedly different. “The event has its own identity,” confirmed Didier Clément, the DS3 WRC’s Chief Operations Engineer. “You could say it is somewhere between Germany and Spain, with some very quick stretches on sweeping, circuit-style roads as well as some much more technical sections. For example, the Pays d’Ormont stage features a wide variety of road types and different surfaces.”

“We need the car to be very balanced in terms of downforce,” continued the engineer. “Testing enabled us to work on this particular aspect with the new Michelin range of tyres, which have been completely redesigned to include a fairly deep, third longitudinal line. The Pilot Sport H4 and S4 will be safer and quicker with average levels of surface water on the road. They are nonetheless slightly less responsive in dry conditions. As the handling is different, we have to adjust the set-up. Our two drivers have adapted well to the new tyres. They had the same feeling and agreed on the same set-up in preparation for this rally.”

After collecting eight points in Germany, Mads Østberg came close to securing his first podium finish on tarmac. Having grown in confidence in Trier, he returns to Alsace and roads that are better suited to him: “I have competed in all four years of the Rallye de France since it moved here. The stages are flowing and very fast. It’s my favourite event on this surface.”

The weather may once again play an important role… And the Norwegian driver would more than happy if it rained: “We have driven in dry and wet conditions. I must admit I really liked it when it was very slippery, in the rain. It’s interesting to try and find some grip when the roads become muddy.”

If there is rain, the Citroën Total Abu Dhabi World Rally Team may be able to take advantage of the tyre upgrade provided by Michelin: “I had the chance to try out the new tyres in testing. The development work has paid off; the tyres offer greater performance on wet and muddy roads. In dry conditions, there isn’t much difference. Our aim is to improve on the rhythm we had in Germany, to score big points.”

Kris Meeke has so far met the high expectations placed in him in the second half of the season. Collecting stage wins and fighting for podium finishes, on both gravel and tarmac, the British driver has made the most of his experience to establish himself among the leading positions.

“The trend is positive,” commented Kris cheerfully. “I feel stronger and stronger in the DS3 WRC. I always try to do my very best. Obviously, I compare my times with those of the other drivers. But above all, I’m looking to do my own rally. I’m making progress at my own speed, keeping focussed on the objectives that we set with the team.”

Kris Meeke has only taken part in one previous Rallye de France – Alsace, back in 2011: “I like the kind of roads you get here. But I have acquired most of my experience during the many test sessions we have organised in the region. For the 2014 stages, we’re going to have to take new pace notes. But with Paul [Nagle], we’re beginning to get used to doing just that!”

“We have managed to be among the frontrunners in the last three or four rallies. We have to keep going and try and mix it more and more with the battle for the lead. I know we can finish on the podium. It’s down to us to perform right to the finish.”

A 303-kilometre sprint against the clock

No other event on the 2014 calendar has course as short as the Rallye de France – Alsace. The crews will complete only 303 kilometres of timed stages before the winner is declared, which is slightly shorter than most Formula 1 Grand Prix.

The shakedown is held again on city centre roads, in the Hautepierre district of Strasbourg. An autograph-signing session and the ceremonial start are scheduled for Thursday afternoon before cars head back to the Zénith de Strasbourg.

On Friday morning, the crews will head south-east for a loop of three stages that will be repeated in the afternoon after the midday service. The first seven kilometres of the Col de la Charbonnière test (11.11km – 8.44am/2.30pm) will be held on previously unused roads. The crews will then move on to Vosges – Pays d’Ormont (34.34km – 9.35am/2.54pm), which is expected to be the decisive stage on day one. The section will conclude with Pays de Salm (9.59km – 10.24am/3.43pm) in much the same configuration as in 2010 and 2011. The day will finish with a run on the Strasbourg super special stage (4.67km – 8.00pm) before the cars head for the service park from 8.40pm.

The final day will be held on roads around Saverne in the Bas-Rhin department. The schedule features two loops of two stages with Forêt de la Petite Pierre (12.33km – 7.30am/10.34am), run at sunrise on the first pass, and then Forêt de Saverne (19.36km – 8.18am/12.00pm), which will serve as the Power Stage. The rally is scheduled to finish in Strasbourg at 3.00pm.

M-Sport after silver in Alsace