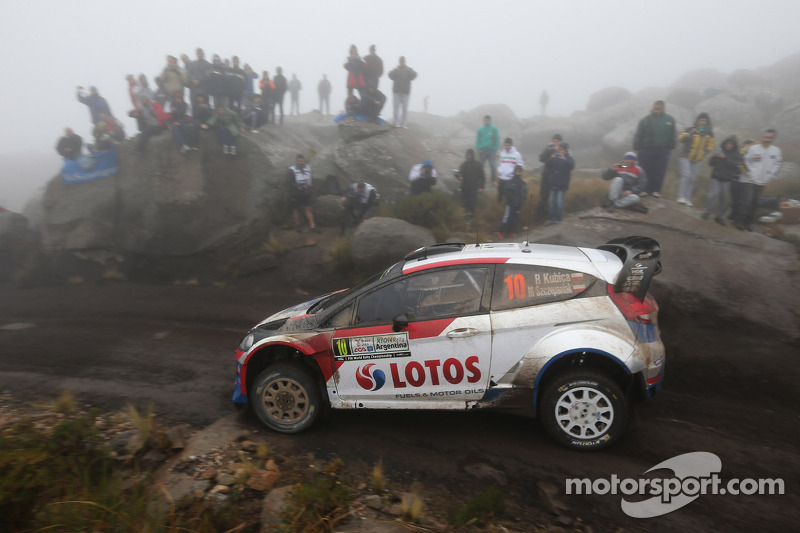 RK M-Sport World Rally Team’s Robert Kubica is reaping the benefits of home support this weekend. Despite an unfortunate roll on the opening day of competition, the Pole has shown some promising and consistent pace which sees him placed eighth overall. Click to download.

Robert started Rally Poland in excellent fashion with a third fastest time through the opening speed test, but rolled his Ford Fiesta RS WRC under braking on SS2. Fortunately, his loyal supporters were on hand to right his stricken Fiesta and, impressively, the Pole lost just 25 seconds as a result. Undeterred by the incident, he lost none of his speed en route to the stage end and was able to match the time of World Champion Sebastien Ogier through the final split.

Unfazed by his SS2 mishap, the Formula One race winner embarked on today’s stages with the same confidence – posting another top-three time through the morning’s opening stage (SS4).

As the conditions worsened with huge ruts forming for the later runners, Robert and co-driver Maciek Szczepaniak controlled their speed to ensure they gained maximum experience in what were some extremely challenging conditions. The second pass of Kapciamiestis-Lithuania and Margionys-Lithuania (SS7 and SS8) were cancelled due to the deteriorating conditions but as Robert tackled the remaining two stages he was on form once again – posting the third fastest time on the closing Super Special Stage (SS10).

Adopting a clever approach, the Pole pushed when he felt comfortable and erred on the side of caution when the conditions became more challenging. This effective mix of speed and composure sees him gain further knowledge and experience whilst developing his pace at the sport’s highest league.

Robert Kubica (8th): “It’s been a long day without so much driving, but I’m pleased with what we have done today and I think the driving has been good. The stages in Lithuania were getting worse and worse the further down the order you were so it was not easy, but we managed it well.

“I’m sure there will be even more people out on the stages tomorrow so I hope it will be a good day for us that the spectators can enjoy. It’s a longer day with five different stages. A lot can happen, but hopefully we can do them well and continue as we have today.”

Team Principal, Malcolm Wilson OBE: “It’s been another encouraging day for Robert [Kubica]. He’s set some very strong times when he felt comfortable, and been sensible when the conditions became more challenging.

“Were it not for yesterday's mistake he would have been much further up the order, but he remains on course for another strong result on gravel and should be pleased with the job he has done behind the wheel.”

Ogier and Mikkelsen dice for honors in Rally Poland