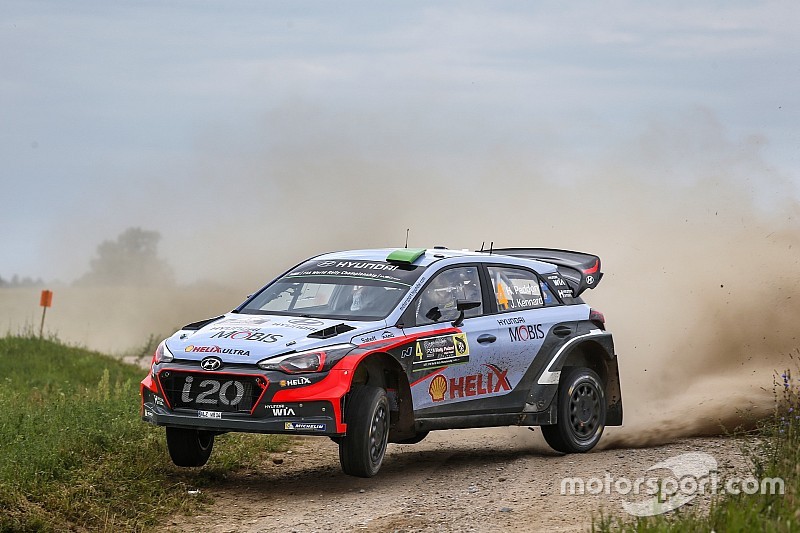 Hyundai Motorsport has taken four wins on the opening ten stages, demonstrating the performance potential of the New Generation i20 WRC in Poland.

Hyundai Motorsport has made a positive start to Rally Poland, round 7 of the 2016 FIA World Rally Championship (WRC), with two cars firmly inside the top-five at the end of the first full day.

Hyundai Motorsport has already taken two victories (Argentina / Sardinia) and a further two podium results (Monte-Carlo / Sweden) in 2016. The team will be aiming to reach the podium once again this weekend, which marks the halfway point of the Championship.

Hayden Paddon has ended Friday in third place overall, just 10.2 seconds behind rally leader Ott Tänak, with the Kiwi taking two stage wins on this morning’s loop and one this afternoon. Thierry Neuville holds fifth position, just over 20 seconds behind Tanak, with Dani Sordo just outside the top ten.

Paddon (#4 New Generation i20 WRC) and co-driver John Kennard look to have bounced back in style after two disappointing rallies since their win in Argentina back in April. The Kiwi crew won Friday’s opening stage (SS2 - Chmielewo) and were again quickest at the end of the morning loop (SS5 - Stare Juchy). A solid afternoon left them well positioned to chase their third podium of 2016.

Paddon said: “We had a good start to this rally, and I felt immediately comfortable in the car during this morning’s loop. I was enjoying myself a lot. Registering two stage wins early on was an ideal way to get the event underway. It’s been pretty close at the front throughout the day. Even this afternoon, when things didn’t run quite as we’d hoped, we’ve been able to stay in touch and add another stage win. There’s still some room for improvement. We know where we need to focus so we’ll sort out a plan of action for Saturday. It’s a fast, fun rally and I’m feeling confident.”

Poland holds happy memories for Neuville (#3 New Generation i20 WRC) and co-driver Nicolas Gilsoul. The Belgian duo secured a podium for Hyundai Motorsport in 2014. They got this year’s event off to a flyer, as they registered a stage win in the opening super special stage at Mikolajki Arena on Thursday evening.

Neuville said: “All in all, we can reflect on a positive day. We got the event started in the right way on Thursday evening with a stage win. Unfortunately, we lost a bit of time during the first full morning loop. Each stage had two or three sections where our pace notes were a bit slow, so we worked on improving that during lunchtime service. The afternoon went well, apart from losing a bit of time in SS9 (Stare Juchy) at a hairpin, so I’m quite pleased. We’re here to fight at the front and we’re definitely in a strong position. I’m looking forward to Saturday’s stages, which are very technical.”

It’s been a cautious start to the rally for Sordo (#20 New Generation i20 WRC) and co-driver Marc Martí. The Spanish crew picked up their pace during the afternoon after struggling for speed in the morning loop.

Sordo commented: “I have really enjoyed these stages today and it’s been a pleasure to drive. I have had good feeling with the car and we’ve not encountered any real problems. We were just not quick enough in this morning’s stages. Of course, running second on the road means we had some cleaning but we were still trying to push. I ran a bit wide at a corner in this morning’s first stage (SS2) but otherwise everything felt OK. The times were just not there. We made some improvements in the afternoon but there’s still time to find. I am sure we can make progress as this rally continues.”

Hyundai Motorsport has established itself as a regular podium contender with the New Generation i20 WRC this season. A top-three finish is the minimum objective in Poland this weekend as the team builds on its most successful WRC campaign to date.

Team Principal Michel Nandan commented: “A solid start to the rally for our three crews. The New Generation i20 WRC has performed strongly today. Our drivers have all said how much they’ve enjoyed driving on these fast and exciting Polish stages. Hayden has had a competitive day with three stage wins and he is definitely one to watch this weekend. Thierry is also pushing following his win in Sardinia; it’s good to see him feeling at ease in the car. There’ll be more to come from Dani as this rally develops. We’re only at the end of the first proper day so, as a team, we’ll keep focused on our objectives. There are things we will improve for Saturday but it looks like we are in the mix.”

Saturday’s itinerary includes almost 125km of special stages. A loop of three stages - Goldap, Stanczyki and Babki - will be repeated with one run in the morning and one in the afternoon. The day will culminate with a third run of the Mikolajki Arena Super Special.