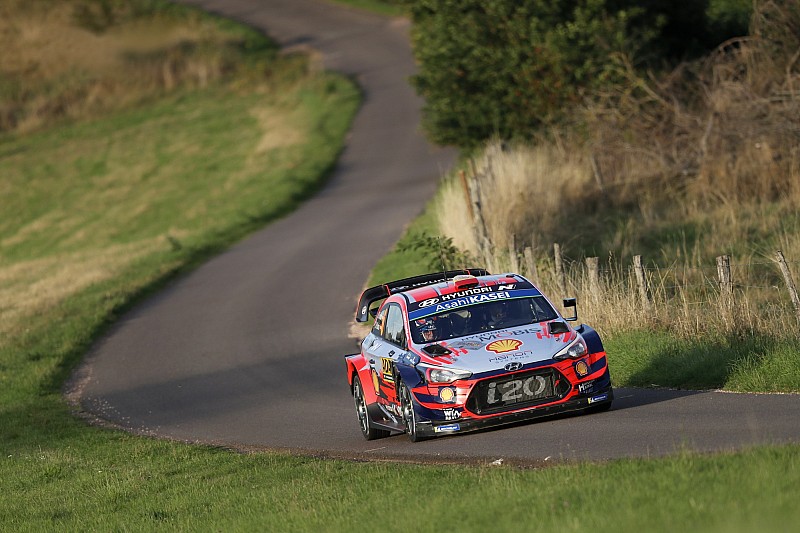 The Hyundai WRC team has to stop relying on its rivals to falter, says team boss Andrea Adamo as he hits out at a "wasted" Rally Germany opportunity.

Dani Sordo was comfortably in the fight for a podium on last weekend's Rally Germany before a gearbox issue halted his progress on the Friday, forcing him to fight back through the order over the next two days.

On the stage before the gearbox issue, Sordo had just overtaken Kris Meeke, who went on to finish second after Hyundai's Thierry Neuville and Citroen's Sebastien Ogier both got punctures in Panzerplatte on Saturday.

“Without a reliability problem, they would surely have been in the mix,” said Hyundai team director Andrea Adamo of Dani Sordo and Thierry Neuvile.

“This is where we cannot be happy; it is another occasion where we have wasted a good opportunity.

“We have to be in control of our own destiny, and that means being high-performing and reliable in every single area of our operation.

“We can’t wait for others to have problems to get results. This is not how we should come rallying or racing.

“So, in summary, our car performance in Germany has been good but our team performance has not. We have to do better.”

Adamo did praise the pace of the i20 Coupe WRC in Neuville and Sordo’s hands, adding: “If you look at the final results, it could appear that we have not had the necessary performance this weekend.

“However, considering the overall car and crew package, we have shown competitive pace.

“Thierry and Nicolas [Gilsoul, co-driver] were fighting for the lead of the rally before their puncture on Saturday.

“I don’t think anyone would have expected it to be so close prior to the start of the weekend. Dani and Carlos [del Barrio, co-driver], too, have been on strong form.”

Sordo fought back to fourth overall with a stage win on Saturday to his name, but gave that position up and handed it to teammate Neuville who is in championship contention.

The extra points – plus a power stage win – mean Thierry Neuville is the closest contender to Rally Germany winner Ott Tanak, who leads the series by 33 points.

Tanak said he believed Neuville could have taken the win on the event.

“On Friday, we were normally one or two tenths faster per stage than he was but on Saturday, it was actually the opposite – Thierry was actually a bit faster than I was,” said Tanak.

“It was looking difficult, so I must say that if it had continued the same way, I would have accepted second place.”

Tanak was able to cruise through Sunday’s stages, and took victory even though he only had one front brake on the last stage.

Hyundai’s third driver, Andreas Mikkelsen, was contesting his first dry asphalt event of the season and struggled to adapt to his i20 Coupe WRC. He finished behind Sordo and Neuville in sixth, despite not having any reliability problems.

He also gained one position after Esapekka Lappi gave up sixth to promote his teammate Ogier.

M-Sport hopes Ford can aid its bid to sign Tanak

Ogier: This year's title would be worth less to me

Audi Quattro: The Group B pioneer that transformed rallying forever

Ogier: This year's title would be worth less to me

Audi Quattro: The Group B pioneer that transformed rallying forever

Morbidelli to contest WRC Rally Monza in a Hyundai

AUDI QUATTRO - Everything You Need to Know | Up to Speed