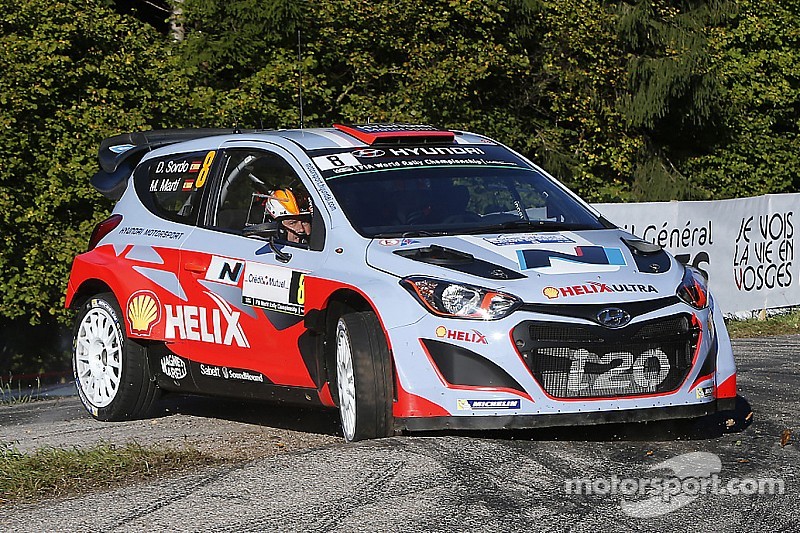 The Hyundai Shell World Rally Team is gearing up for the penultimate round of the 2014 FIA World Rally Championship (WRC) – and the only mixed surface event of the season – RallyRACC Catalunya – Costa Daurada, Rally de España next week.

Three Hyundai i20 WRC cars will tackle the combination of gravel and asphalt stages with Thierry Neuville and Nicolas Gilsoul driving the #7 car, local heroes Dani Sordo and Marc Martí with the #8 and Kiwis Hayden Paddon and John Kennard, who make their return to the #20 Hyundai i20 WRC.

The rally will be based in the coastal town of Salou, with the first day of competition on Friday held on gravel roads (with SS4/7 Terra Alta run on mixed surface) and the last two days on tarmac stages. Rally de España represents a challenge for crews and technicians alike; after the six gravel stages on Friday, the team will have to adapt the three Hyundai i20 WRCs to asphalt running.

As it is the only mixed surface event of the year, Rally de España is certainly a lot different to the other rallies we contest during the season.

In addition to all the normal repair and set-up work, the mechanics will change the transmissions, brakes and suspensions on the cars in just 75 minutes.

The Hyundai Shell World Rally Team prepared for the rally by carrying out a short gravel test with Sordo and a longer tarmac test with all three drivers in Spain last week, to adapt to the specific type of sealed surface for this event. Unlike Germany and France, the tarmac in the area of the rally is smooth and abrasive, and the roads are similar to a racing circuit in some places, requiring a stiffer set-up.

The main objective for the rally remains a three-car finish, but the team will use the rally to fully evaluate its performance level on tarmac.

Team Principal Michel Nandan commented: “Rally de España will be a big challenge not only for the drivers but for the entire team as it is like two rallies in one with stages on both gravel and tarmac. Friday night’s service will be tough for our engineers and mechanics as they have to prepare the car for tarmac in only 75 minutes. With this being the last tarmac rally of the season we will ask our drivers to push more to see what level we have reached since France and the pre-event test.

Of course we are not expecting to be right at the top because this is still a development season for us but it would be good to see Dani, Thierry and Hayden go for it a little bit more without compromising our key objective, which is – as always - to learn as much as possible for the future by getting all our cars to the finish.”

Neuville, who finished fourth in Spain last year, will look at making the most of his previous experiences at the event and to bring home another positive result for the Hyundai Shell World Rally Team.

Neuville said: “As it is the only mixed surface event of the year, Rally de España is certainly a lot different to the other rallies we contest during the season. We tested on tarmac to accumulate more kilometres on this surface with the Hyundai i20 WRC and to find the best set-up possible for the specific kind of asphalt we will find in Spain.

We will head to this rally with the objective of finishing the event without any problems and we will try to keep a good pace throughout the weekend. Nicolas and I learned a lot last year from this rally and we will do our best for another positive performance.”

On his 12th outing at his home rally, local hero Sordo is eager to continue the series of positive results he has achieved on tarmac this year with the Hyundai Shell World Rally Team. Running on home soil will give an extra boost to the Spaniard, who will have lots of fans and supporters cheering for him on the stages.

Sordo commented: “There is always a great atmosphere at Rally de España and the tarmac stages are very nice and fast. Of course, it’s special for Marc and me as we will have a lot of support from the spectators. We have the first day on gravel and I prefer it like this; my position in the championship means I will have a good starting order and, hopefully, a cleaner road surface, which could help the overall result. It’s not so hard to switch to tarmac for the final two days because you are going from not so much to plenty of grip. It’s actually harder the other way around.”

Young New Zealander Paddon made his debut in a World Rally Car in last year’s Rally de España, finishing in a remarkable eighth place, while this year the rally marks his debut on tarmac with the Hyundai Shell World Rally Team.

Paddon commented: “It’s great to return to Rally de España, a rally I’ve done a few times before and that I particularly enjoy. John and I will tackle the rally with our feet on the ground as it will be our first time on tarmac with the Hyundai i20 WRC so there’s a lot to learn and to take in but we’ve done a good test and preparations for the event and I think we’re up to the task.

The gravel stages on Friday might be a challenge so we will take them easy before we push a bit more on the nice fast and flowing tarmac stages on the final two days. These are stages on which I feel comfortable, it’s only a matter of getting a good feeling with the car - I think if I can do that quite quickly in the event, we should be able to get a good result.”

With the Service Park and Headquarters based at the Port Aventura Resort, Rally de España will officially kick off on Thursday 23 October in Barcelona with a Super Special Stage held in the Montjuic area. Friday 24 October will see the competitors tackle six gravel stages and a mixed surface stage before switching to tarmac for Saturday and Sunday for a total itinerary of 372 competitive kilometres. To celebrate its 50th edition, the rally will feature a 50km stage on Saturday (SS9/11 Escaladei), one of the longest in the Championship this year.