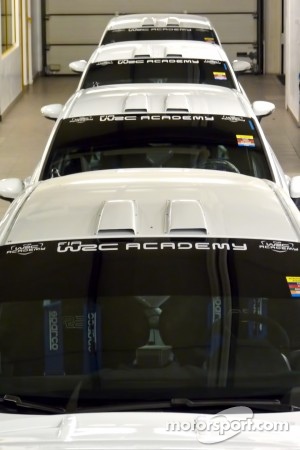 Old friends and new join the Pirelli supported FIA WRC Academy this year as M-Sport can today confirm the first batch of competitors that could be named WRC Academy Champion in 2012. With a host of national champions in the mix, this year’s candidates are of an exceptionally high calibre and entries are on a par with 2011 when the Pirelli Star Driver (PSD) programme ran six candidates in the series' inaugural season.

Introducing the drivers in alphabetical order:

Returning for 2012, Sweden’s Fredrik Åhlin (20) will be joined by Norwegian Morten Erik Abrahamsen as the Scandinavian pairing look to utilise their past experience in pursuit of the Cup victory. As the youngest ever overall winner in Sweden, and member of the Swedish National Rally Team, 20-year-old Åhlin secured a podium finish at the notoriously challenging stages of Rally d’Italia Sardegna last year and will be looking to secure his first win on the world stage as the Academy embarks on its second consecutive season.

Having contested the final round of the WRC Academy in its inaugural season, American Chris Duplessis (24) returns for an assault on the one-make series in 2012. Rallying since 2005, the American will be joined by co-driver Karl Atkinson. Despite being a newcomer to the world stage, Duplessis has an impressive track record in the USA, becoming 2WD champion in 2007, 2008 and 2010 and has already claimed 2WD victory on the opening two rounds of the Rally America series.

New to the WRC Academy, but with an extensive knowledge of the Ford Fiesta R2, Welshman Elfyn Evans (23) and co-driver Andrew Edwards will be real contenders for a strong result on the season opener at the end of the month. Having piloted the Fiesta to victory in the Fiesta SportTrophy UK and Ireland Championships in 2008, Evans went on to win the UK series with an unprecedented clean sweep – winning all seven rounds – in 2010. In the same year, the 23-year-old secured the BRC (British Rally Championship) Junior Championship and claimed victory in the UK’s Pirelli Star Driver Programme and in 2011, recorded the best-ever result for the Ford Fiesta R2 when he secured first in class and 16th place overall at Rally de France, Alsace.

After securing third place overall in the inaugural season of the WRC Academy, Briton Alastair Fisher (23) and regular co-driver Daniel Barritt return to the series eager to put their 2011 experience towards securing the ultimate prize. Despite misfortune early in the season, the Northern Irish driver claimed victory at the 2011 Rallye de France, Alsace and a podium finish on home soil at Wales Rally GB. Proving he is more than ready for the step-up to the Ford Fiesta S2000, 2011 also saw the 23-year-old compete behind the wheel of the Fiesta S2000 on the Donegal International Rally to claim second place overall.

After contesting two rounds of the WRC Academy in its inaugural year, Ashleigh Haigh-Smith (19) returns to contest the season in 2012. The South African started his rally career at the age of 14, co-driving for his father and finishing first in class at the Western Province Regional Championship. Attending a Rally School in the UK in 2007, Haigh-Smith secured a 75% pass and was named ‘Driver of the Day.’ With a special dispensation from the MSA, the youngster drove his first event at the age of 15, winning his class despite being unable to drive on the open road sections. With past experience of the series, the South African will be chasing his first overseas victory in 2012.

As one of the most improved drivers in last year’s WRC Academy, Yeray Lemes will be looking to put his experience into practice as he pursues the title in 2012. Finishing fourth overall in last year’s standings, the Canarian Islander’s development was rewarded when he and co-driver Rogelio Peñate secured a VW Motorsport seat for the 2011 RACC Rally de España. Proving he has real potential with five S-WRC stage wins on his first outing behind the wheel of the S2000, Lemes will be a firm favourite for the 2012 WRC Academy title.

Also new to the series for 2012, John MacCrone (22) will be joined by fellow Scot, Stuart Loudon. Despite this being the duo’s first experience of the WRC Academy, the pairing will be ones to watch as the season kick starts in Portugal at the end of the month. MacCrone held the 205 Ecosse Challenge Championship and was the Scottish Junior Champion in 2009. Contesting Rally Scotland as part of the IRC last year, the Scotsman claimed first in class and went on to be the class victor at the 2011 Wales Rally GB, proving his pace against more experienced WRC Academy drivers.

Making a welcome return to the series, Brendan Reeves (23) and his co-driving sister Rhianon Smyth will be looking to add 2012 FIA WRC Academy Cup Champions to their already impressive résumés. In 2012, Reeves was selected to participate in the FIA Institute Young Drivers Excellence Academy and regularly competes for Mazda Australia, driving in Targa events for the manufacturer since 2008. Finishing fifth in last year’s WRC Academy series, the 23-year-old Australian will be looking to apply his extensive experience in pursuit of the Cup victory.

As the first Portuguese driver to compete in the WRC Academy, João Silva (24) and co-driver José Janela will be looking to make an impact from the off. Silva began his rally career in 2007 and has since been named two-time Madeiran Junior Champion in 2009 and 2010 and crowned 2WD Portuguese Rally Champion in 2011. The 24-year-old made his WRC debut at the Vodafone Rally de Portugal back in 2010 and in 2011, claimed the class victory.

Jose Antonio Suárez (20) makes a return to the series alongside regular co-driver Candido Carrera Estevez. An expert on asphalt, Suárez claimed the R3 and Junior series in the Spanish Tarmac Rally Championship in 2010. Not to be outdone on gravel, the Spaniard finished second overall in the Spanish Gravel Rally Championship and will be looking to put his experience of the 2011 edition of the WRC Academy to good use as he chases victory in 2012.

Supported by the Dutch Motorsport Federation’s (KNAF) young driver initiative, Timo Van der Marel (22) returns to the feeder series alongside experienced co-driver and fellow Dutchman Erwin Berkhof. Van der Marel’s rallying career began in 2008 and his debut in the World Championship followed in Germany the same year when he took victory in the N3 class. As a member of the FIA Institute Young Driver Excellence Academy, the 22-year-old will be keen to put the lessons of 2011 to good use as looks to improve on his podium finish at last year’s Neste Oil Rally Finland.

Supported by Ford Racing in Europe, the WRC Academy crews will once again pilot identical Ford Fiesta R2s with control tyres from Pirelli. Contesting six rounds in Portugal, Greece, Finland, Germany, France and Spain, a new rule for 2012 will see the WRC Academy crews count their best five scores in their overall cup points thus allowing the opportunity for more drivers to appear before the Acropolis Rally of Greece.

With a host of talented youngsters making up the field, this year’s edition is sure to provide some thrilling entertainment with any of the competitors having the potential to be named 2012 FIA WRC Academy Cup Champion.