Robert Kubica to compete in top-flight WRC category, for the first time, at the final round of the 2013 FIA World Rally Championship.

Former Formula One star and this year’s driver of a Citroën DS3 RRC, Robert Kubica will step up to the DS3 WRC for the final round of the World Rally Championship (WRC), competing with co-driver Maciek Baran at the highest level, on Wales Rally GB (14-17 November). It will be the first time that the 28-year-old Pole has competed at the WRC's highest level since switching from F1 to rallying following the serious accident in early 2011 in which his forearm was partially severed.

With four category wins from the six rallies in the lesser WRC2 category, Kubica can rightfully feel pleased with his debut season in the WRC. Currently leading the WRC2 championship standings, he will be trying to seal overall class victory later this month at Rally RACC Catalunya, where second place would be enough for him to win his first world title. 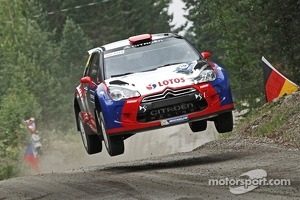 Wales Rally GB, which until now was not part of his programme for this year, will provide him with the perfect opportunity to put his skills to the test in rally’s top-flight category.

“This one-off outing for the works team is a great opportunity for me, but it’s also a huge challenge,” revealed Kubica. “Wales Rally GB wasn’t part of my original programme, so I’m very happy to be able to have this precious experience. I would like to take this opportunity to thank my partners, and especially the Lotos Group and Citroën Racing for having made this possible.”

Andrew Coe, Chief Executive of International Motor Sports Ltd, the organisers of Wales Rally GB, commented: “We welcome Robert Kubica to Wales Rally GB, and are delighted to announce that both our international and national entry lists have not only exceeded expectations, but also feature some of the greatest names in modern day rallying. Having Kubica compete at our event, which has been named the Rally of Legends, will be a treat for all the fans that will be lining the route and avidly watching the action as it unfolds in the Welsh forests.”

The four-day finale to this year’s World Rally Championship, re-located in north Wales, is now based at a new Service Park in Deeside, Flintshire. This is not only close to the motorway network but also is perfectly placed for some of the world’s most iconic forest rally stages, many of which are either totally new or have not been featured in the WRC since the nineties. Adding to the spectacle, some of these will be run after dark on the Thursday evening (14 November).

Double in sight: Volkswagen could clinch the manufacturers’ title in Spain

Kubica still has regrets over missed title bid in 2008