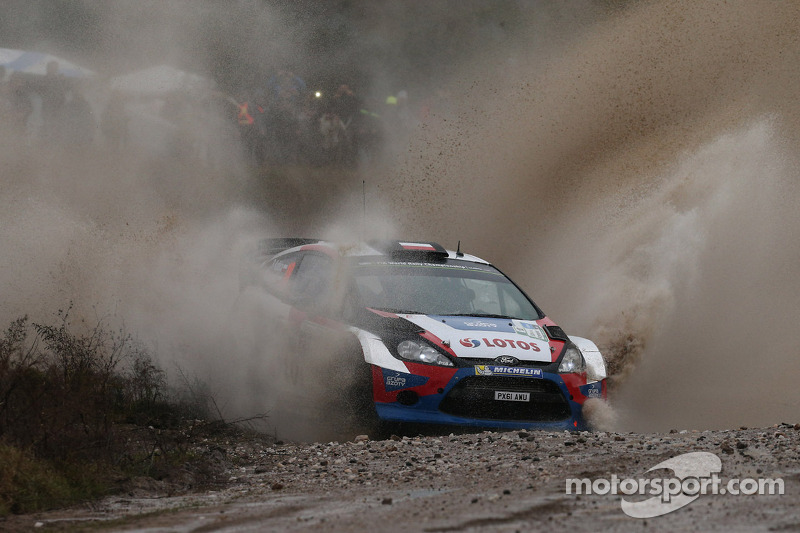 Robert Kubica overcame all that Rally Argentina had to offer to bring his Ford Fiesta RS WRC home in a highly respectable sixth place.

After two extremely challenging days of rallying, today’s final leg was to be no different. Leaving the mountain tracks and open roads far behind them, the crews embarked on some of the championship’s most unique and iconic terrain – the moon like vistas of the Valle de Traslasierra.

The conditions posed a real challenge with thick fog and mud accounting for poor visibility and a considerable loss of grip. The nature of the stages demanded precision cornering and near-perfect concentration. Despite his limitations, Robert rose to the challenge brilliantly with a highly composed and consistent drive that saw him post the fifth fastest time through the event’s final stage (SS14). Having developed his pace notes alongside fellow Pole and co-driver Maciek Szczepaniak, the Formula One race winner found the perfect compromise – displaying caution in the narrower sections whilst resisting the temptation to show his true pace through the faster speed tests.

As with any true racer, the Pole is always looking to improve and having completed one of the year’s most demanding events without incident, Robert is now well placed to further his development as the season continues.

Robert Kubica (6th): “It’s been a very long and demanding rally with some very difficult conditions. Coming here for the first time with no experience of the stages was really challenging, and we knew after the recce alone that it would be a difficult event. The stages themselves are very technical, and then when you add the conditions that we witnessed today, it was certainly not an easy event.

“There is no magic in this sport and experience is fundamental. It is better to finish in sixth than not finishing at all, but to finish in fourth or second is even better! Of course we need to be realistic for the moment and I think that myself and Maciek [Szczepaniak, co-driver] have driven a very positive rally this weekend.”

Team Principal, Malcolm Wilson OBE: “I am very pleased for Robert [Kubica] to have finished such a technically demanding rally without incident. He’s kept out of trouble to gain the experience that is so vital at this level, and the knowledge that he has gained can only further his development. He’s taken a step forward and is well placed to continue his progression.”