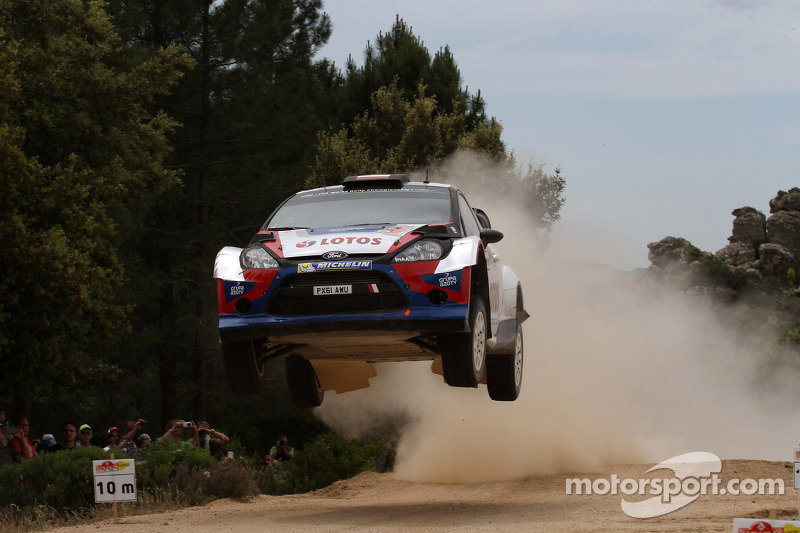 Rally Italia Sardegna allowed Robert Kubica to demonstrate both his potential and his progress.

RK M-Sport World Rally Team’s Robert Kubica is taking the positives from this weekend’s Rally Italia Sardegna. Despite having to start the final day under Rally 2 regulations, the Pole finished in eighth place overall.

The event allowed Robert to demonstrate both his potential and his progress. The 29-year-old was unlucky to damage the front-right wheel of his Ford Fiesta RS WRC after an impact with an unsighted rock on SS12, but the positives were clear to see.

Partnered by fellow countryman and co-driver Maciek Szczepaniak, the Pole kept pace with the front-runners over the course of Friday’s stages. Setting two third fastest times on SS3 and SS9 as well as the second fastest time over the first pass of ‘Loelle’ (SS5), his impressive performance through the more familiar speed tests highlighted how vital experience can be.

Returning for the final day of competition with 10 minutes of Rally 2 penalties, Robert had a positive attitude having gained more confidence behind the wheel of his Fiesta. Well aware of the progress he has made this weekend, the Pole concentrated on gaining further experience whilst maintaining his top-ten position.

Thoroughly enjoying this weekend’s outing on what is his least preferred surface, the Formula One race winner has established an encouraging platform on which to continue his development as the championship returns to his native Poland later this month.

Robert Kubica (8th): “Unfortunately we made one small mistake this weekend. It wasn’t a mistake from driving too fast; we just hit a stone that we could not see which broke the wheel. Were it not for that we would have finished a lot higher.

“Of course the most important thing is the way I drove all rally. The feeling behind the wheel was very good which is important because normally on gravel I don’t have such a good feeling. This is something promising and I hope that we can take this forward to the next events.

“Rally Poland will be another new event for us, but I think that the rally will be something very special. Not only for myself, but for also for Polish motorsport and for the Polish fans – of which there are a lot!”

Malcolm Wilson OBE, Team Principal: “It’s fair to say that Robert [Kubica] was really unfortunate yesterday. The rock was unsighted and he had done very little damage to the car.

“He’s made a big step in performance and it is great to see him leaving a rally full of confidence and looking forward to his home event.”