Robert Kubica and Michele Ferrara will undoubtedly be the main attraction at the thirteenth and final round of the season.

After a brief flirt with Spain last year, the World Rally Championship’s season-ending finale returns to its traditional home in Wales. With both titles wrapped up, all the competitors can go for it no holds barred, starting with the Citroën Total Abu Dhabi WRT crews.

For Mikko Hirvonen/Jarmo Lehtinen and Dani Sordo/Carlos del Barrio, the end result will be the only target. Competing for the first time in the DS3 WRC of the Abu Dhabi Citroën Total WRT, Robert Kubica and Michele Ferrara will undoubtedly be the main attraction at this, the thirteenth and final round of the season.

Leaving behind its home for the last few years, in Cardiff and then Builth Wells, Wales Rally GB heads to the north of the country this year. Now based in Deeside, not far from Liverpool, the British event boasts a new course for 2013, combining stages used in recent years with tests that have not featured in the rally since the 1990s.

Drivers will need to show considerable staying power and look after their machines in the Welsh forests, because service periods have been cut to a bare minimum this year. Given the fact that the weather can be terrible at this time of the year, this rally has all the ingredients necessary to serve up a very special motorsport event! 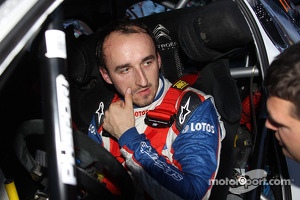 Having competed in Wales ten times already, winning here in 2007, Mikko Hirvonen is one the event’s leading specialists. Currently fourth in the Drivers’ World Championship standings, Mikko can end the year in the top three provided he finishes among the leaders next weekend.

“After finishing on the podium five times this season, obviously I’d love to end the season with a win,” confirmed the Finn. “It’s a difficult rally, but I like the stages’ extremely fast roads. It’s exhilarating for drivers, although you have to be careful to keep out of trouble. At this time of year, we may well get the worst of the weather conditions, with fog and rain, and maybe even frost first thing in the morning. That can make braking of any kind pretty tricky, so you have to respect the course.”

Currently fifth in the overall standings, Dani Sordo is also keen to finish the season on a high: “Obviously, this isn’t my favourite surface. I like gravel, but more so when the grip is consistent. In Wales, we’re often faced with a racing line that is covered in mud! But I’m not going to get too worried about it; my goal is just to try and achieve the best possible result.

I proved once again in Spain that I could deal with slippery conditions. As is the case on all of the gravel rounds, you have to be on the pace from the word go on the qualifying stage in order to be able to choose a good starting position for the first leg.”

After winning five rounds this year, Robert Kubica secured the WRC2 title at the Rally de España. As a reward for his performances – which have been impressive on his debut season in international rallying – the Pole has been promoted to the Abu Dhabi Citroën Total World Rally Team. He will be competing in the no.10 DS3 WRC and will be looking to continue learning about the sport at this level.


Taking your season in the DS3 RRC together with the rallies in which you have competed in various different World Rally Cars, does your experience mean that you can feel relaxed about switching to the DS3 WRC? “I think it’s difficult to compare the races I have competed in so far in a WRC with Wales Rally GB! This will be my first time competing in a gravel event in top-level rally car. I still have a lot to learn about: the stages and the team, of course, but also my co-driver. There are lot of new things, but I’m looking forward to making the most of this opportunity.”

After having competed all year with Maciek Baran as your co-driver, you are actually going to team up with the Italian Michele Ferrara. Can you therefore just switch from one language to another? “I’m not going to get into the details, but Maciek told me he wanted to stop after Rally de España. I don’t want to force anyone to drive with me, so I looked for the best alternative solution for this final rally of the season. Michele isn’t any more experienced than me, but he is very motivated for us to do well together. Although I have spoken Italian since I was very young, it won’t be easy to switch languages, especially as I have made extensive changes to my pace notes system this season. But we’ll just have to get on with it, and cope with it all as well as we can!”

You have finished in the top 10 of the overall standings five times with the ‘little’ RRC. What would you consider to be a good result here? “Obviously, it would be great to finish in the points again, but I’m not aiming for a specific result. My goal is to rack up the miles and increase my knowledge of the WRC. Each rally in the World Championship has its own distinctive features. In Wales, I know that the combination of fast roads and extreme weather can make it very difficult, especially for an inexperienced driver.”