Jari-Matti Latvala is a champion in Sweden for the third time.

The Finn, who claimed his maiden victory here in 2008, beat Volkswagen team-mate Andreas Mikkelsen by 53.6sec after a tight battle through snowy forests in Sweden and Norway. Mikkelsen, who twice led the rally, secured his first WRC podium.

Third went to Mads Ostberg who finished just 5.9sec behind his fellow Norwegian to secure his fourth consecutive podium in the championship’s only true winter round.

“It’s my third win here and I’ve never won the same rally three times,” said Latvala, who was embraced at the finish of the final stage by father Jari. “It feels amazing to win here, it’s something very, very special.

“It’s a long time since my win in Greece last year. That was more about tactics and saving the car, but this is a high-speed event so it gives me confidence that I can also win high-speed rallies. I really needed a good result here,” he added.

World champion Sebastien Ogier, Mikkelsen and Latvala dominated the opening leg in their Polo R cars. When Ogier dropped more than four minutes yesterday morning after crashing into a snowbank, Mikkelsen moved to the front.

Two stages later Mikkelsen did the same and Latvala was ahead. Mikkelsen remained in close contact and they started today’s longest leg separated by 3.6sec. But when Mikkelsen plunged into the snow for a second time this morning, Latvala could relax.

“This is absolutely fantastic,” said Mikkelsen. “I really hoped for this at my home event with all my friends and family here and second is more than I could ever have dreamed of. This morning we were maybe fighting for a win but I made a small mistake and after that it was about keeping Ostberg behind us.”

Ostberg struggled for confidence initially in his first loose surface rally in a DS3, but came to terms with the car and saw off the Ford Fiesta RS cars of Mikko Hirvonen and Ott Tanak. 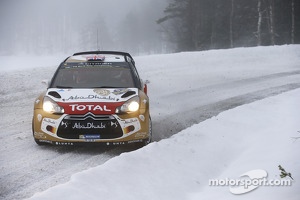 Hirvonen finished 1min 27.4sec behind with Tanak delivering possibly the drive of the rally to take fifth after more than a year away from the championship. He was 33.6sec behind Hirvonen.

Ogier recovered from 20th to finish sixth, overhauling Henning Solberg in the penultimate stage. Pontus Tidemand, Craig Breen and Kris Meeke completed the leaderboard, Meeke bouncing back after losing seven minutes and sixth place when he slid into the snow this morning.

Elfyn Evans was on course for ninth until rolling his Fiesta RS in the final stage, while Martin Prokop retired this morning when he went off and became stuck in the snow.

Hyundai duo Juho Hanninen and Thierry Neuville finished down the order after respectively damaging a wheel and breaking the front right suspension on their i20 cars yesterday and Robert Kubica was 24th after three lengthy spells in the snow.

Round three is Rally Mexico which is based in Leon on 6 - 9 March.