It was an all-day battle between two former teammates in the second day of Rally Sweden. Ford’s Jari-Matti Latvala and Mikko Hirvonen in his Citroen factory team DS3 ended up first and second by the end of the opening leg in the FIA World Rally Championship’s second event of the 2012 season. The majority of the day's stages were actually run in Norway, but starting tomorrow the event will be ran officially on Swedish snow.

It was expected that the Nordic drivers would be in a tight fight to take this year’s victory in Sweden due it being a classic winter rally with the challenge of snow and icy conditions. Driving his Ford Fiesta RS, Latvala ends the day with a 16.8 second lead over Hirvonen. The two Finnish racers have landed the victory three times with Hirvonen holding the 2010 and ’11 wins. His rival for the spoils this year took the victory in 2008.

I must keep pushing tomorrow and it’s important to stay focused.

It was toward the end of the day before Latvala was able to break away, partly due to the starting position he was able to choose after winning yesterday's qualifying stage. Even though he got the road position he wanted Latvala only landed one stage win. “My start position strategy paid off and it was an excellent day,” he said. “I made a few small mistakes this morning which cost me the lead and the car oversteered a little, but that improved as the day continued. I knew I was losing time to Petter in the penultimate stage because my studs were more worn, but I remained calm and it turned out that other drivers were losing even more.

“Today was the hardest for the tyres but the grip remained good this afternoon. I must keep pushing tomorrow and it’s important to stay focused. Keeping clear of the snow banks will be key because it’s all too easy to be dragged into the soft snow and become stuck,” added Latvala.

For Hirvonen the final stages were quite challenging. The Finn lost most of his studs on the Citroen's winter tyres and he was helpless to watch his lead evaporate while sliding around on the stages. When all the studs are working the car's grip is so phenomenal that they actually brake deeper into the corner than they can on gravel! If a tyre loses that advantage then all the driver can do is tread carefully and hope the grip on rubber alone will keep him out of the snow banks. The fact Hirvonen was still able to keep second place is a testament to his superb winter driving skills.

“The car was sliding so much that I couldn't push. We were so close today that it is frustrating to lose so much time. Everything is still to play for, however. I’ll be pushing hard tomorrow to try and catch Jari-Matti," vowed Hirvonen. 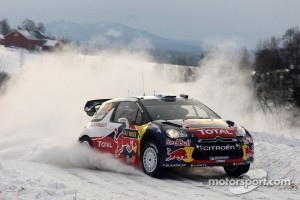 Hirvonen earned stage wins as did Dani Sordo, Mads Ostberg and Petter Solberg. The Norwegian was in the fight and setting a good pace and set the fastest times on the final two to close out the day in third, 18.6 seconds behind his Ford teammate and within striking distance to Hirvonen.

Solberg was beside himself after running strongly in front of his countrymen. “I took a safe option with my choice of start position but it was the right decision. It’s only my second rally in the Fiesta and both the team and I are building and learning together. I didn’t think I would adapt to the car quite so quickly in the snow and ice. It was great to see so many people watching alongside the family farm and hotel. It was quite special competing in my home country, in front of my fellow countrymen.”

The eight times champion for the Citroen team, Sebastien Loeb, ended up in a snow bank and dropped down the leaderboard to 11th overall. It is rare when Loeb makes an error but the 7th stage saw the drama unfold with a loss of two minutes. The Frenchman now sits seventh. Loeb did earn the third and sixth stage wins.

“I was caught out when I got a little bit too sideways into a left-hand bend, which lead onto a righthand hairpin," explained Loeb. "I couldn‘t manage to turn the car and slid off, ending up stuck in a snow bank. Some spectators came to push us back onto the road, but we lost almost two minutes. I’m out of the running for a place on the podium; we now have to make sure we make it to the end and pick up as many points as possible.” 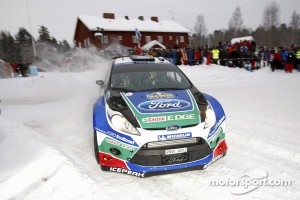 With Loeb out of the picture the fight for third went down between Solberg and fellow Norwegian Mads Østberg. The M-Sport Ford driver held the advantage until stage 9, Østberg tells why, “On the second pass we were struggling a bit with the set-up of the car so we’ll try to do something with that for tomorrow afternoon. Tomorrow morning we’ll go out with the same set-up we were using this morning. We had the same set-up on the last stage [SS9] but still lost time to Petter [Solberg]. But I think he saved his tyres and also he drove the stage in the daylight and we were stuck between daylight and darkness so the lampods didn’t really help and it was difficult to see the roads. I think that maybe explains a little bit why we lost so much time."

Tomorrow four more stages that will be looped twice each await the drivers. Hirvonen will have to be in perfect form tomorrow in order to chase down Latvala. The pair have owned Rally Sweden in recent years, so barring any critical mistakes, their fight will be awesome to watch. Behind them the battle over third will be equally as impressive as Solberg and Østberg are both proving to be skilled drivers in one of the most challenging events of the year. The show might be over for Loeb, but keep an eye on the Frenchman as he climbs up the ranks to earn as many points for his 2012 title efforts. With little to risk Loeb will be on maximum attack.