The team won four of the 10 speed tests, Latvala and Solberg taking two victories each. Ford has won the last five fixtures at the championship’s only true winter encounter, and the Fiesta RS WRC, which claimed a clean sweep of the podium in Sweden last year, holds five of the top six places.

The rally began last night with a spectacular curtain-raising special stage around the trotting track in the rally base of Karlstad. After a 05.00 restart this morning, competitors journeyed north-west of the city to tackle the bulk of the day’s action over the border in Norway. The final two tests, including a repeat of the Karlstad stage, were back in Sweden, generating 144.66km of competition.

Temperatures hovered around -10ºC, enough to guarantee full winter conditions, but not cold enough to ensure the roads were pure ice. That encouraged both Latvala, fastest in the WRC’s first ever qualifying session yesterday, and Solberg to select start positions well down the order, with the aim of obtaining better conditions after the loose snow had been swept away.

The decision paid off immediately as Latvala was equal fastest on this morning’s opening stage, spanning both Sweden and Norway. He took the lead on the next test and reached the brief 15-minute service in Kongsvinger just 2.9sec from the front. The 26-year-old retook top spot this afternoon and managed the stud retention in his Michelin tyres well to widen his advantage.

“My start position strategy paid off and it was an excellent day,” he said. “I made a few small mistakes this morning which cost me the lead and the car oversteered a little, but that improved as the day continued. I knew I was losing time to Petter in the penultimate stage because my studs were more worn, but I remained calm and it turned out that other drivers were losing even more.

“Today was the hardest for the tyres but the grip remained good this afternoon. I must keep pushing tomorrow and it’s important to stay focused. Keeping clear of the snow banks will be key because it’s all too easy to be dragged into the soft snow and become stuck,” added Latvala.

Today’s opening 27.07km Mitandersfors test passed a farm and hotel owned by the Solberg family, and the 37-year-old Norwegian delighted his home fans with a string of consistently fast times. He held second, before losing 10 seconds with a spin and sliding to fifth.

However, he too managed his tyres superbly. After fitting his spare wheels later than his rivals this afternoon, the studs were in perfect condition for Solberg to win the penultimate stage by more than seven seconds and climb to third. He is 18.6sec behind his Ford colleague.

“It was a fantastic afternoon,” said Solberg. “I chose to switch tyres later than everyone else. Although I lost time to everyone on the short stage after they made their changes, I gained more time on new tyres over the next two longer tests. I also adjusted the front ride height and softened the dampers before the last long stage and it worked perfectly. I want to keep the car exactly as it is now. 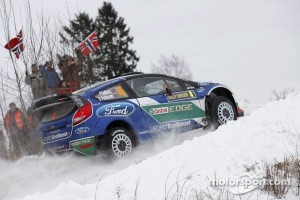 “I took a safe option with my choice of start position but it was the right decision. It’s only my second rally in the Fiesta and both the team and I are building and learning together. I didn’t think I would adapt to the car quite so quickly in the snow and ice. It was great to see so many people watching alongside the family farm and hotel. It was quite special competing in my home country, in front of my fellow countrymen.”

Ford World Rally team director Malcolm Wilson reflected on a hugely satisfying opening leg. “Our planning to develop a start order strategy worked perfectly and the both of pace drivers was evident throughout the day. Petter put his experience to good use by managing his tyres skilfully, and the result was a stunning stage win and a place on the podium tonight. Jari-Matti was consistently fast. We will make a small change to the suspension set-up on his car for tomorrow,” he said.

The second leg is based entirely in Sweden and the stages rarely stray far from the Hagfors service park. After leaving Karlstad at 06.00, drivers tackle two identical loops of four tests covering 117.76km, before returning to the city for the final overnight halt at 20.26.

Hirvonen Battling It Out For Top Spot