Latvala leads for Ford in Greece after Solberg wins qualifying

Ford World Rally Team drivers Jari-Matti Latvala and Miikka Anttila made a stylish return from injury to lead the Acropolis Rally of Greece after tonight’s opening speed test. Latvala, recovering from a broken left collarbone, won the 25.24km Kineta special stage, the longest of the rally, by 2.8sec in a Ford Fiesta RS World Rally Car.

Team-mates Petter Solberg and Chris Patterson were fifth in another Fiesta RS WRC, 14.6sec behind their colleagues. Solberg admitted his choice of Michelin’s soft compound tyres was a mistake as the rough and rocky roads near Loutraki, west of Athens, proved more abrasive than he thought. 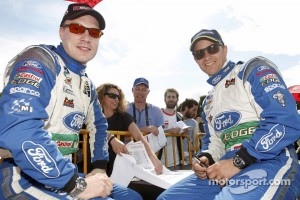 Latvala’s early lead ended a satisfying day for the Ford team, which earlier claimed first and second in qualifying for this sixth round of the FIA World Rally Championship. Solberg was fastest over the 6.20km test by just 0.098sec from Latvala. It meant the duo were able to select low starting positions for the opening leg, from which they hope to benefit from cleaner and faster road conditions.

Latvala missed the previous round in Argentina after falling while cross-country ski-ing in training. However, the 27-year-old was quickly back into the groove in tonight’s test, which contained a 4.5km asphalt section in the middle, and was held under cloudy skies and cool temperatures.

“The stage felt very fast, but perhaps it was because I’ve not been in a rally car for a few weeks,” he said. “My split times were similar to Sébastien Loeb’s but I pulled clear at the hairpins in the final section. I had no pain in my shoulder, which is encouraging for the rest of the rally, and now I will have some treatment from our physio. This will be a rough, tough rally, so I must take care.”

Solberg completed the stage with all four tyres badly worn, and the 37-year-old Norwegian admitted his gamble in opting for soft rubber was an error.

“It was my choice,” he said. “The team said it was a risk and they were right. I thought the tyres could work well in the falling temperatures and I expected the roads to be sandier with our low start position. But the car slid around a lot, even before the asphalt. It’s not the end of the world. I’ve led several rallies this season during the first leg, but now I’m the chaser, so let’s see how that works.”

Ford World Rally Team director Malcolm Wilson said: “I’m delighted to see Jari-Matti back on form after his injury. He did an excellent job. Petter thought soft tyres were worth a try but it didn’t pay off. He did well not to lose too much time and he’s still in a solid top five position.”

Friday is a marathon for competitors, with more than 700km of driving and almost 16 hours behind the wheel. They start at 06.00 and journey north around the Gulf of Corinth to tackle stages near Itea that have not been used since 2009. After leaving Loutraki there are only two short remote service zones in Itea, during which competitors can only use spare parts carried in the rally car. The day ends at 21.50 after a 45 minute service in Loutraki, following eight stages and 169.12km of action.