Latvala holds a slender lead ahead of Sordo after today's runs on asphalt; however Sordo wanted the Finn to be first on the gravel roads for the final day of action.

Jari-Matti Latvala ended the second leg of Rally de Espana with a slender 1.6sec lead, but clever tactics from second-placed Dani Sordo set up an absorbing final leg tomorrow as the event switches from asphalt to gravel.

Sordo trailed Latvala by 0.1sec heading into the penultimate stage, after which tomorrow’s start order was calculated. The Spaniard measured his pace to stay behind Latvala, ensuring the Finn starts first tomorrow.

He must sweep the loose gravel roads in his Volkswagen Polo R, leaving a cleaner and faster line for Sordo to capitalise on behind. But, intriguingly, an early start means dust could hang in the still air behind Latvala, negating Sordo’s advantage and handing the initiative back. 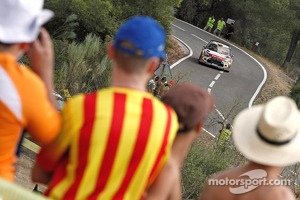 In an effort to reduce the dust threat, organisers have increased the gap between the top cars from two to three minutes – but will that be enough?

Sordo’s Citroen DS3 was fastest in the opening two stages to climb from third to second, reducing Sebastien Ogier’s lead to 6.5sec.

When Ogier broke his Polo R’s front left wheel in the final morning test after hitting a stone not marked in his pace notes, he lost 50sec to leave Sordo and Latvala tied at the top. Latvala then edged ahead on the opening afternoon test before Sordo’s tactics came into play.

As the drivers arrived back at Salou for an extended 75 minute service to allow teams to transfer their cars from asphalt to gravel specification, Latvala pondered tomorrow’s situation.

“Going from asphalt to gravel after two days won’t be easy,” he said. “It’s a new challenge but I have a good feeling. I hope the weather will give me some support. A little bit of moisture to dampen the loose gravel would be nice....” he smiled.

“I lost a bit of time at the end of the stage so I could be in a better position tomorrow,” said Sordo, who manoeuvred himself behind Latvala last night to monitor tactics from the Finn and respond accordingly. “All I can do is try my best. The tactics started yesterday and have gone OK. Can I win? I hope so, it’s a big challenge.”

Thierry Neuville is third, 29.3sec behind Latvala after a frustrating morning when he was unhappy with the balance of his Ford Fiesta RS. Changes in service revitalised the Belgian.

“It was all about settings,” he said. “When we found that, then I had the usual rhythm and was on the pace. Maybe we can catch Dani tomorrow, but Sebastien is close behind as well.”

Ogier recovered to fourth, 46.5sec off the lead and cannot be ruled out. “I don’t know what’s possible. There’s 140km to go and I’m starting fourth on the road. We’ll push and see what we can do,” promised the Frenchman.

Mikko Hirvonen lies fifth in a DS3, only 0.1sec ahead of Evgeny Novikov’s Fiesta RS. There is a 90sec gap to Mads Ostberg in seventh, the Norwegian increasing in confidence as changes to the suspension of his Fiesta RS improved its handling.

Andreas Mikkelsen retired after hitting a stone in the opening stage and breaking his Polo R’s rear suspension, while Nasser Al Attiyah crashed his Fiesta RS in the penultimate test.

Competitors restart tomorrow at 06.00 to tackle two identical loops of three stages covering 138.54km before the afternoon finish in Salou.

Robert Kubica has a commanding lead in the WRC 2 competition at Rally de Espana and remains on course to secure the championship title on Sunday. 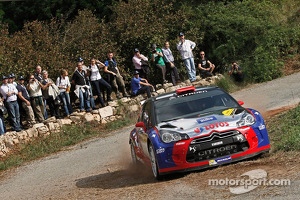 Second place this weekend would be enough to give the ex Formula 1 ace an unassailable lead in the World Rally Championship’s premier support category, but completing Saturday’s stages with a four minute lead over Sepp Wiegand, a fifth season win looks more likely.

Kubica was fastest on five of today’s six stages, and was only beaten on the day closing 2km sprint through downtown Salou because a technical problem meant he wasn’t able to spin his Citroen RRC around the hairpin bends.

“Our only problem was a broken handbrake, so in tight conditions we had to stop and reverse to get around the corners,” he explained. “Other than that it has been a good day, all okay for us.”

Elfyn Evans was Kubica’s closest challenger for most of the day. The Welshman was second fastest in his Fiesta R5 on every stage, and only two minutes adrift, before he retired after taking a wheel off at the Salou street stage.

“It was really slippery, and we clipped a hairpin which broke a steering joint and ripped a front wheel off,” explained Evans. “It was a silly mistake and slightly embarrassing to say the least. We’ll get it sorted and get out again tomorrow. I’d like to go out and challenge again.”

Evans' exit promoted Skoda Fabia S2000 driver Sepp Wiegand into second. The German has been consistent performer through Saturday's stages, going third-fastest on every one except the Salou sprint, which he won.

Yazeed Al Rajhi is third, 51.5sec further back in a Ford Fiesta RRC, with Subhan Aksa a distant fourth and Robert Barrable, who dropped back with a broken driveshaft this morning, rounding off the top five.